Accessibility links
'Love My Rifle': A Woman Soldier's Guide to Iraq American and Iraqi special forces continue door-to-door searches for rebels in northern Iraq on Monday — the same region where author and military intelligence specialist Kayla Williams served. Williams wrote about her experiences in her new book Love My Rifle More Than You: Young and Female in the U.S. Army. As part of the ongoing Day to Day series of conversations about the war in Iraq, Alex Chadwick talks with Williams about her book.

Listen
'Love My Rifle': A Woman Soldier's Guide to Iraq

American and Iraqi special forces continue door-to-door searches for rebels in northern Iraq on Monday — the same region where author and military intelligence specialist Kayla Williams served. Williams wrote about her experiences in her new book Love My Rifle More Than You: Young and Female in the U.S. Army. As part of the ongoing Day to Day series of conversations about the war in Iraq, Alex Chadwick talks with Williams about her book.

In Iraq, the latest battle for the northern city of Tall'Afar appears over, with the insurgents on the run again. More than 100 of them are reported killed by US and Iraqi special forces in fighting over the weekend. They hold the city now, despite reported threats from al-Qaeda to use chemical or bio weapons in the region.

This is familiar terrain for Kayla Williams, a former military intelligence soldier with the 101st Airborne. It looks different now when she sees it on the news, she says; it looks worse. Her new book on her experiences in Iraq is "Love My Rifle More than You." That's a phrase from one of the cadences that soldiers sing out in training. DAY TO DAY is featuring a series of conversations about Iraq. Earlier we spoke with the anti-war leader Cindy Sheehan. Today, with Kayla Williams, we begin talking about being a woman in the Army.

Ms. KAYLA WILLIAMS (Author, "Live My Rifle More than You"): It can be different for a woman to be a soldier, but that loyalty to your fellow soldiers is still such a dominant and driving force. It's one of the ways that the Army can keep going and keep people in, despite low pay and poor conditions. You want to be there for each other. But definitely it can be different to be a woman because we're only 15 percent. And especially times when I was the only woman among maybe 20 male soldiers or one of four women among 300-plus male soldiers, I could definitely feel that I stood out.

CHADWICK: Stood out. And sometimes that worked for you, and very often it worked against you.

Ms. WILLIAMS: There are times that it can be convenient. I don't like to use my femininity because I would prefer to be respected for my ability to do my job. But there were times when I would--especially for the benefit of my whole team or to get something we needed for the vehicle to make the vehicle work, I would occasionally take advantage of it. If it meant that we could get the truck fixed and running and get back to doing our mission, I might smile sweetly to the mechanic. I would feel guilty, but at the same time if it got us up and running and doing the mission, it seemed like a worthy price to pay.

CHADWICK: How do you feel about the Iraq War now?

Ms. WILLIAMS: I didn't support the war when we went. I didn't believe that we were being given very honest motivations for why we were going. And I only went because I didn't want to let down my fellow soldiers or not live up to a commitment that I made. I signed my contract; I had to do my job. But when we drove across the berm, it was so different. We were greeted in some areas by cheering throngs of Iraqis, and that was contrasted in my head with the images of protesters in America and Europe.

And every Iraqi that I spoke to had a reason that they hated Saddam. Every single person I spoke to in Iraq wanted to tell me what Saddam or his regime had done to their family or their personal life: `Saddam's people cut down my fig trees and stole our women.' I mean, everyone had a reason. And it definitely made me think, `Maybe we have done the right thing.' And it's such a conflict within me because I know that we have removed a horrible despot, who did gas his own people, who did practice genocide. But I know the hypocrisy of the fact that we are not intervening in the Sudan. So, of course, I feel, `Were we only there for oil? Was it a bigger play on the geopolitical stage?' I just wish that it was a more honest discussion about why we were there.

And in terms of how I feel about it now, of course, it's been devastating to watch the situation get even worse since I've left and really fall apart. For example, Tall'Afar, when we were there, was relatively safe.

CHADWICK: This is the city in the western mountains?

Ms. WILLIAMS: Yes, it's in northwest Iraq. And it wasn't that dangerous when we were there, but it's--I see it in the news frequently now as being a haven for smugglers and a dangerous place to be. And that's very depressing to think about kids that I may have interacted with and wondering whether they've made it or how dangerous the situation is or are they being turned into terrorists. So those things have been very tough. And I wish so much that we could establish a stable enough system that we could leave, but I think it would be so unfair to pull out now as close to complete chaos as Iraq is right now.

CHADWICK: So these calls for us to get out as quickly as possible, you don't think that's a good idea?

Ms. WILLIAMS: No. I think Somalia is still a complete disaster, and I don't want to see Iraq become that bad. And I'm afraid that with ill-trained, ill-equipped security forces and with a government that's still fledgling and still trying to feel its way and create some stability, it would be a terrible idea to pull out. We're working hard at training security forces there, police and some sort of army. If we can get to the point where there is more security and the Iraqi people can provide security for themselves, then it'll be a better time to think about pulling out.

CHADWICK: You know, one thing that's really difficult to assess from over here, no matter how much you read in the newspapers, is the attitude of Iraqis themselves because reporters are cooped up. They can't get much access in Baghdad or other places to Iraqis. And it strikes me that you probably had better access than many reporters would because you were out interacting with Iraqis, at least sometimes. You're going on patrols and you speak Arabic.

Ms. WILLIAMS: Right. And I loved the fact that I could talk to regular Iraqi people. A lot of the Iraqi attitude was really summed up in an experience that I had actually when combat was still going on. We were waiting to move, and I was in front of a man's house pulling guard while we prepared to move out. And the man, when realized I could speak Arabic, starting talking to me. There were artillery pieces in his back yard, and it was very clear that we were destroying his crops. And he came to me and he said, `I want peace, I want freedom. I'm glad Saddam is gone, but not like this. My children are terrified. My children are crying.'

And it was so clear that he felt so angry and helpless and that he definitely was glad the regime was changing, but he didn't want it to have that much impact on his personal family. And I think that that's probably a pretty common sentiment. The Iraqi people really seemed to want us to get in, get rid of Saddam and be able to immediately repair infrastructure, get everything running and perfect and then get out immediately. And, unfortunately, it's just not that simple or that fast.

CHADWICK: Kayla Williams is author of the new book "Love My Rifle More than You." Kayla, thank you.

Ms. WILLIAMS: Thank you for having me. 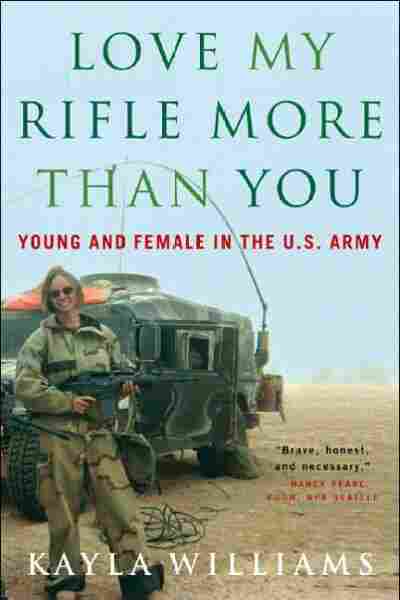 Love My Rifle More Than You

Young And Female in the U.S. Army

Title
Love My Rifle More Than You
Subtitle
Young And Female in the U.S. Army
Author
Kayla Williams and Michael E. Staub