Accessibility links
Outsourcing Compassion: Debriefing Trauma Patients Sept. 11 made public an academic debate over the effectiveness of trauma counseling. In the face of criticism, the largest provider of "critical-incident stress debriefings" has now changed course. It no longer urges participants to rehash the trauma or suggest symptoms they might be experiencing.

Sept. 11 made public an academic debate over the effectiveness of trauma counseling. In the face of criticism, the largest provider of "critical-incident stress debriefings" has now changed course. It no longer urges participants to rehash the trauma or suggest symptoms they might be experiencing. 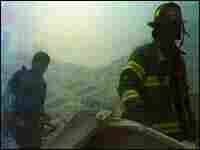 Hear more of what researchers and survivors have to say about Post-Traumatic Stress Disorder and the events of 9/11. hide caption

In recent decades, violent events in the United States have given rise to a new industry: trauma counseling. In the aftermath of the September 11th terrorist attacks, thousands of workplaces brought in counseling teams to help employees talk about their experiences. It turns out many of these debriefing sessions were based on limited science. As Stephen Smith of American RadioWorks reports, 9/11 has forced some in the crisis counseling industry to rethink what they're doing.

Sitting on a bench outside her Manhattan office building, Brenda DeSteffano(ph) describes what happened to her the morning of September 11th. DeSteffano's office is near ground zero. She was just arriving when the first airplane hit the World Trade Center. Debris rained down on her.

Ms. BRENDA DeSTEFFANO: I felt this heavy thing hit my back and hit my body, and it hit me so hard it knocked me off my feet. I found myself just laying there on the ground covering my head. It was just so frightful.

SMITH: DeSteffano was injured in her back, legs and feet. After she got out of the hospital, a manager at her accounting firm encouraged her to try a counseling session at work.

Ms. DeSTEFFANO: And I'll never forget him, his kindness, picking me up that morning, saying, `You know, I really think you need to come.' And I said--it was a group session. A lot of people were grieving people that they lost that they knew, a lot of firemen. People knew firemen that died. And we basically shared our story, and I just told them, you know, `There's a reason why God allow us to survive.'

SMITH: DeSteffano says the discussion group was wonderful; it felt good to talk. James Herbert, a clinical psychologist at Drexel University, says a lot of people, like DeSteffano, were urged to tell their stories after 9/11.

Mr. JAMES HERBERT (Clinical Psychologist, Drexel University): Almost immediately you saw people talking on TV and in the media about the psychological effects, the fallout that we were to expect. And we were essentially told that the country was going to fall apart because everyone was going to have post-traumatic stress syndrome and depression and this sort of thing. And you had therapists from all over the country start mobilizing and moving into the New York City area to treat these throngs of victims, who were destined to have all kinds of psychological problems.

SMITH: One company quick on the scene was Crisis Care Network, a Michigan-based firm that took over a Manhattan hotel and counseled 1,200 employee groups in the weeks following 9/11. One of the company's training videos demonstrates how debriefing works.

Unidentified Man #1: How's your concentration? How are you thinking at work?

Unidentified Man #2: Yeah. I wonder if it's worth coming into work. It's like you're not even doing anything.

SMITH: Debriefing is based on the idea that people need to tell what happened to them, to unburden themselves and to make sense of the experience. It also typically involves explaining how trauma may affect the people in the group. Common symptoms include sleeplessness, irritability and avoidance of situations that remind them of what happened. Crisis Care Network told its clients, the employers, that debriefing helps workers get back on the job faster and cuts down on absenteeism and turnover. Bob VandePol is the company's president.

Mr. BOB VANDEPOL (Crisis Care Network): For folks who right now are feeling like a glob of jelly because they were just terrorized, it's important to have someone come along and be a bowl to put them in, so that they don't feel like they're going to quiver and fall off the table.

SMITH: But psychologist James Herbert says the problem is the bowl may help mold the jelly.

Mr. HERBERT: In the immediate aftermath of trauma, the people appear to be very susceptible to whatever messages they're given. If you give them a message that says that you're likely to develop whatever kinds of symptoms those are, list--fill in the blank, list the symptoms, many people will go on to develop those symptoms.

SMITH: When Herbert heard about throngs of therapists rushing to debrief New Yorkers after 9/11, he quickly organized 19 of the world's top researchers on trauma to publish a letter in the American Psychological Association's Monitor magazine. The letter began with the Latin words `primum non nocere,' the first tenet of medicine: `First, do no harm.'

Mr. HERBERT: However well-intentioned, by trying to intervene prematurely, we might actually cause more harm than good.

SMITH: One of the people who signed Herbert's `First, do no harm' letter was Richard Gist, an academic researcher and psychologist with the Kansas City Fire Department.

Mr. RICHARD GIST (Academic Researcher, Psychologist, Kansas City Fire Department): Debriefing shows no effect at preventing post-traumatic stress disorder, a condition that most people would not acquire to begin with. And the majority of those who might actually experience distress at that level would still resolve over time. But it will not prevent that, and, indeed, it may complicate recovery for some who would otherwise get better.

SMITH: Gist says he soured on debriefing in the 1990s when data from the United States and abroad started to pile up showing adverse effects in some people. Gist says debriefings seemed especially problematic for people who cope best by holding in their feelings. But the data weren't reaching the corporate human resources managers, who kept hiring the debriefing teams.

SMITH: That debriefing product was developed by a former Maryland firefighter and paramedic named Jeffrey Mitchell. He wanted to find a way to help emergency workers handle the extreme stress of their jobs. Mitchell has defended his approach, saying that the crisis intervention companies who adapted debriefing for the workplace often misuse his technique. For example, he says groups of people who didn't share the same level of exposure to trauma or experienced different kinds of trauma were debriefed together, and that's wrong.

After 9/11 major publications picked up on the `First, do no harm' letter, and a scientific argument over debriefing spilled into The New York Times and The Wall Street Journal. Bruce Blythe, who ran the nation's largest crisis intervention company using such debriefings, found himself on the defensive.

Mr. BRUCE BLYTHE (Ran Crisis Intervention Company): Yeah, I was in denial. When I first started out, you know, we had a lot of people just say, `You know, it's so good. We're so glad that the company came in, and they show that they care.' And people would talk about it, and they would say that it was really helpful to know that other people were feeling the same way they were. But what we didn't realize was that some people were distressed by what they heard. Some people just don't want to hear other employees describing what a corpse looked like.

SMITH: Blythe needed to figure out what to do, so he approached debriefing's biggest critics, including Richard Gist. Blythe says they began a debate over e-mail.

Mr. BLYTHE: He said, `Group debriefings may feel good, but,' he said, `somebody bringing doughnuts into the break room feels good, too, but it's not necessarily good for you.' And I went, `Wow,' you know. Maybe just 'cause these things do feel good doesn't necessarily mean it's good for people. So he's the person that really turned me around, and at that point he was saying, `It's better to do nothing than to have group debriefings.' And I was saying, `But there's a social expectation. There needs to be something done.'

SMITH: So Bruce Blythe recruited Richard Gist as an unpaid consultant to retool the debriefing method. They got rid of the practice of rehashing the trauma story. Instead of handing out a list of symptoms, they explained to people how to stay resilient and how to find support systems. They called their new approach group resiliency briefings. Gist says the emphasis is on being positive and practical and sticking with what's been proven to help people in a crisis.

Mr. GIST: It's important for the whole sake of our discipline and our responsibility to the public that we get back to our empirical roots and that we be able to demonstrate that the things that we bring with the best intention of our hearts also provide the best help to the people that we attempt to serve.

Meanwhile, many employee-assistance companies still offer the original form of incident debriefing. In any case, as one 9/11 survivor said, `The outsourcing of compassion is here to stay.' For American RadioWorks and NPR News, I'm Stephen Smith.

Tomorrow, in the second and final part of our series, the brain science of post-traumatic stress disorder.

SIEGEL: This is ALL THINGS CONSIDERED from NPR News.