Accessibility links
Bush Tours Flood-Ravaged New Orleans President Bush tours the storm-ravaged city of New Orleans in a military transport. Troops swept through the area ahead of the president's arrival, making sure holdouts had been removed.

President Bush tours the storm-ravaged city of New Orleans in a military transport. Troops swept through the area ahead of the president's arrival, making sure holdouts had been removed. 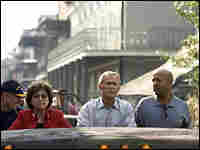 President Bush has yet to respond publicly to news of Michael Brown's resignation. He's been spending the day in the Gulf Coast region, his third inspection of the mess Hurricane Katrina left behind. NPR's David Greene reports on the president's tour of New Orleans today and his answers to questions about the government's response to the storm.

The president spent Sunday night aboard the USS Iwo Jima, which is docked in New Orleans and serving as a staging ground for the military. He spent the morning visiting several neighborhoods in the stricken city. Then he paused on a corner underneath an overpass to chat with reporters, who asked whether Congress should study whether the federal government should act faster during future disasters. Mr. Bush said Congress should take a hard look at Katrina but that that's down the road.

President GEORGE W. BUSH: Now I know there's been a lot of second-guessing. I can assure you I'm not interested in that. What I'm interested in is solving problems. And there will be time to take a step back and to take a sober look at what went right, what didn't go right. There's a lot of information floating around that will be analyzed in an objective way, and that's important. And it's important for the people of this country to understand that all of us want to learn lessons. If there were to be, you know, a biological attack of some kind, we gotta make sure we understand the lessons learned to be able to deal with catastrophe.

GREENE: The president was also asked about a comment he made shortly after the hurricane hit. At the time Mr. Bush said, `Nobody anticipated that the levees in New Orleans would breach.' Today he revisited that comment.

Pres. BUSH: What I was referring to is this: When that storm came by, a lot of people said, `We dodged a bullet.' When that storm came through, at first people said, `Whew.' There was a sense of relaxation, and that's what I was referring to. And I myself thought we had dodged a bullet. You know why? 'Cause I was listening to people probably over the airwaves say, `The bullet has been dodged.' And that was what I was referring to. Of course there were plans in case a levee had been breached. There was a sense of relaxation at a critical moment, and thank you for giving me a chance to clarify that.

GREENE: Mr. Bush was also asked to pinpoint the moment he realized how severe the storm really was.

Unidentified Reporter #2: Mr. President, did you...

Pres. BUSH: ...which is, by the way, extraordinary. Most emergencies the president signs after the storm has hit. It's a rare occasion for the president to anticipate the severity of the storm and sign the documentation prior to the storm hitting. We anticipated a serious storm coming. But as the man's question, you know, said--basically implied, you know, wasn't there a moment where everybody said, `Well, gosh, we dodged a bullet,' and yet the bullet hadn't been dodged.

GREENE: Later this afternoon the White House clarified his remarks. They noted in a transcript sent to reporters that the president actually learned how powerful Katrina was and conveyed it to the nation on Sunday, not on Monday.

Mr. Bush spoke to reporters after climbing aboard a green military truck and driving through a few neighborhoods. The entire city remains under an evacuation order. After leaving New Orleans, Mr. Bush was on his way to Gulfport for another tour of that ravaged Mississippi community. David Greene, NPR News.