Accessibility links
The USS Alligator's Mysterious Designer Nell Boyce delves into the history of French inventor and immigrant Brutus de Villeroi, who was contracted by the U.S. government to design the Navy's first submarine, the USS Alligator.

An illustration of the USS Alligator U.S. Navy hide caption 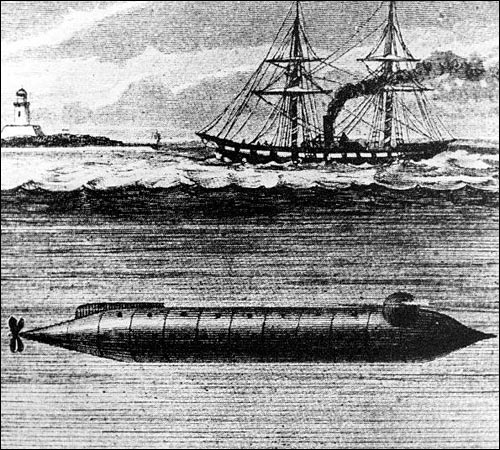 An illustration of the USS Alligator

On May 18, 1861, a strange story appeared on the front page of The Philadelphia Inquirer. The country was embroiled in a bloody civil war, nerves were running high, and a mechanical "monster," made of iron, had been discovered in the local harbor and seized by the police. It was a small submarine, built by the French inventor and immigrant Brutus de Villeroi, who was apparently searching for sunken treasure.

The story caught the attention of the United States Navy, which was looking for a technological innovation to help them fight against the Confederate states' new ironclad ships. Submarines have a long history, but the Alligator was the U. S. Navy's first.

The government contracted with Villeroi, who designed a bigger, 47-foot submarine. The initial design had oars, which looked like little legs and led to the sub's name, "Alligator." Later, the clumsy oars were replaced by a screw propeller turned by hand. The Alligator boasted many technological innovations. It had a device to clean the air of carbon dioxide, and a diver lockout chamber so that someone could exit the submarine under water and return. Unfortunately, it was lost at sea during a storm in 1863, before it ever got to see combat. The Alligator has been long forgotten and overshadowed by other submarines, like the Confederate CSS H. L. Hunley, which was built two years later.

The Alligator's inventor, Villeroi, also remains mysterious. No photograph or portrait has ever surfaced. Records show he was born in France, and his father was a printer. No one knows exactly why he was in the United States, or what his profession was. At the time of a 1860 census, he gave his occupation as "natural genius."

Villeroi designed the Alligator, but he likely never saw its completion. During its construction, letters show that he continually pestered government officials and the Philadelphia contractor that was building the ship. He eventually became isolated from the whole effort. "He was colorful, and very sure of his own abilities. I don't know if he was a likeable person. But he was a very strong, opinionated person," says Catherine Marzin, who works for the National Oceanic and Atmospheric Administration and went to France to research Villeroi. "I know he is one of those characters that people would remember."

Last year, Marzin went to the French Service Historique de la Marine in France, looking for information about Villeroi. She did not find much. But she did found a letter the inventor had written to the French government, trying to sell his technology. The letter contained a small diagram of a submarine he said he had designed for the United States military. These are the only blueprints ever found for the Alligator. The discovery has aided efforts to understand what happened to the submarine. It has helped experts at NOAA and the Office of Naval research by revealing critical information, like how much it likely weighed, and how much air it might have had in it.

Marzin's research suggests that Villeroi probably never sold another submarine design, and might not have done well financially. He and his wife seemed to move to less prosperous neighborhoods in the years before his death.

One tantalizing mystery is whether Villeroi's ideas inspired the writer Jules Verne. "We found a text in a translation of Twenty Thousand Leagues Under the Sea that mentioned Villeroi as the math teacher to Jules Verne. They were from the same city," Marzin says. But she says this connection is hard to prove, and other scientists were designing submarines at about the same time. "For us, though, the tie is very exciting. There is this aura of mystery to the Alligator that we hope can capture the imagination of our kids today in school and help them get interested in the science."