Accessibility links
The Stones Defiant: 'A Bigger Bang' This week, the Rolling Stones release a new album, their first studio effort in eight years. It's called A Bigger Bang. Reviewer Tom Moon says the spare, cohesive style of the songs demonstrate why the Stones are such a unique rock band.

This week, the Rolling Stones release a new album, their first studio effort in eight years. It's called A Bigger Bang. Reviewer Tom Moon says the spare, cohesive style of the songs demonstrate why the Stones are such a unique rock band. 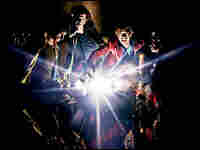 In the world of music in the early 21st century, The Rolling Stones make an easy target. They're old guys playing young music. Their rebel image has been coopted by countless big corporations--on the current tour, they've aligned with the NFL and NASCAR. And when The Rolling Stones come to town, it's like the circus; good or bad, they will always sell out. This week, Mick Jagger and crew unveil a new CD called "A Bigger Bang." Tom Moon reviews.

The ritual is the same whenever The Rolling Stones put out new music: Die-hard fans approach prepared to cringe; expectations are superlow. Nobody really thinks these veterans will ever approach the heat of, say, this 1972 classic, "Tumbling Dice."

Mr. MICK JAGGER (The Rolling Stones): (Singing) Women think I'm tasty, but they're always tryin' to waste me and make me burn the candle right down.

MOON: Well, surprise, surprise. For the first time in a couple of decades, here comes Rolling Stones music that isn't completely dwarfed by the stadium-shaking hits of yesteryear.

Mr. JAGGER: (Singing) So put your lips to my hips, baby, and tell me what's on your mind. I know you still got the animal attraction for me. It's been a long, long time. It's rough justice. Oh, yeah! We never thought it dusty. It's rough justice, but you know I never break your heart.

MOON: Singer Mick Jagger and guitarist Keith Richards began working on "A Bigger Bang" while drummer Charlie Watts was recovering from throat cancer. They collaborated more closely than they had on previous records. Jagger played bass and electric guitar and even drums. Keith Richards says that they had just one rule: Keep everything simple.

(Soundbite of "Let Me Down Slow")

Mr. JAGGER: (Singing) You look a little dressed up. You're actin' way too smart. Your face a little bit flushed for a walk in the park.

MOON: When Charlie Watts came back, Richards says, the drummer showed them how the new songs were really supposed to go. Ron Wood added slide guitar. Jagger played harmonica like the hellhounds had found his trail again and suddenly, the rock band that had been struggling to sound relevant got its groove back.

(Soundbite of "Back of My Hand")

Mr. JAGGER: (Singing) I hear a preacher on the corner ranting like a crazy man. He says there's trouble, troubles are coming. I can read it like the back of my hand.

MOON: These songs are scrappy little things. There's not much spectacle in them. Mick Jagger's lyrics are pretty much the usual: variations on treachery and lechery and the aftereffects of some lost weekend, except for this one track which registers contempt for the neoconservatives in Washington.

Mr. JAGGER: (Singing) One thing that is for certain: Life is good at Halliburton. If you're really so astute, you should invest in Brown & Root. Yeah! How come you're so wrong, my sweet neo con?

MOON: You hear that roar, that spare and un-retouched rhythm, and realize that's what's been missing from the latter-day Stones' efforts. These new songs ride on what "Tumbling Dice" and all the other classics did, an eternal kind of pulse, a group cohesion and swing that no other rockers on the planet can touch. In that way, The Stones were like the Count Basie band, keepers of a rhythmic quintessence that will likely vanish whenever they call it quits. The rambunctious energy that drives "A Bigger Bang" suggests that won't be anytime soon.

BLOCK: "A Bigger Bang" is the new CD from The Rolling Stones. Tom Moon writes about music at the Philadelphia Inquirer.