Accessibility links
Roberts Offers Clues, Avoids Direct Answers Supreme Court nominee John Roberts continues to avoid direct answers but gives some tantalizing clues about how he will handle his role if -- as appears an increasing certainty -- he is confirmed. 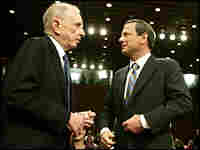 "I've never seen anybody who's done a better job of explaining himself than you," said Sen. Orrin Hatch (R-UT), a veteran of nine previous Senate Judiciary Committee hearings on Supreme Court nominees.

"If people can't vote for you," Hatch said, gesturing toward the Democratic side of the committee, "then they can't vote for any Republican nominee."

For their part, Democrats continued to press Roberts to detail his views on legal issues and to criticize him for refusing to answer directly. But some appeared ready to accept Roberts' confirmation as the nation's 17th chief justice as all but assured.

"We're really rolling the dice with you, judge," said Sen. Joseph Biden (D-DE), who chaired two of the Judiciary Committee's most contentious confirmation hearings, on Justice Clarence Thomas in 1992 and unsuccessful nominee Robert Bork in 1987.

Roberts himself remained in generally good spirits during another seven hours of questioning by the panel's 10 Republicans and eight Democrats. At day's end, Committee Chairman Arlen Specter (R-PA) said there would be another half hour of questions early Thursday before a private session to consider the FBI background report on Roberts. Sessions with public witnesses are to be concluded by the end of the week.

The committee now plans to vote on Roberts' nomination on Thursday, Sept. 22, with a Senate floor vote likely the next week. That schedule would allow Roberts to be in the chief justice's chair when the high court opens its new term on Oct. 3 -- the traditional first Monday in October.

No Answers on Abortion

Roberts offered few new clues about his views on controversial legal issues ranging from abortion to the "right to die." On Tuesday, Roberts had endorsed a constitutional right to privacy and the importance of precedent, but he stopped short of saying whether either principal would apply to abortion rights.

On day two, Roberts turned aside a question by the strongly anti-abortion Sen. Sam Brownback (R-KS). Asked whether an "unborn child" is "a person" or "property," Roberts said, "I don't think it would be appropriate for me to comment one way or another."

Under questioning by Sen. Biden, Roberts also avoided taking a position on whether a legislature could prevent a patient from withdrawing life support.

"I can't answer that in the abstract," Roberts said. "There are cases that come up in exactly that context, so it is in play."

Near the end of the morning session, Biden seemed to speak for many of his Democratic colleagues in expressing frustration with Roberts' answers.

"It's kind of interesting, this Kabuki dance we have in these hearings here," he said, "as if the public doesn't have a right to know what you think about fundamental issues facing them."

A Few Clues on Congressional Reach

Roberts did give senators some slight hints that he will not take a narrow approach to the scope of Congress's power to regulate interstate commerce, nor an unduly deferential attitude toward presidential power.

Roberts also distanced himself somewhat from court decisions faulting congressional procedures. "I don't think the court should be the taskmaster of Congress," he said. "The Constitution is the court's taskmaster, and it is the Congress's taskmaster too."

On another question, Roberts -- who has been criticized for taking a broad view of executive authority -- rejected a suggestion from Sen. Dianne Feinstein (D-CA) that he would give "total deference" to the president on foreign policy.

Democrats continued to press Roberts for reassurances on civil rights issues; Roberts obliged on some issues, but not on others.

Under close questioning from Sen. Edward M. Kennedy (D-MA), Roberts eventually said he has no present doubts about the constitutionality of a key provision of the Voting Rights Act that Kennedy helped author in 1982.

But Roberts refused to repudiate another memo around the same time that criticized the Supreme Court's decision striking down a Texas law allowing school districts to bar admission to children of illegal aliens. The memo is one of the major points cited by Latino groups in opposing Roberts' confirmation.

Roberts said he wrote the memo because the ruling was "inconsistent" with the views of his former boss, Attorney General William French Smith. Only under close questioning did Roberts finally appear to accept the outcome of the case. "I agree, of course, that children should be educated," he said.

By the end of the day, many senators were turning to speeches and self-acknowledged lobbying of Roberts on their favorite issues with no pretense of asking questions. On one of the most volatile issues -- gay marriage -- Sen. Brownback sternly warned against courts' taking control of the subject from legislatures.

"Everybody's now scared what the Supreme Court's going to do," Brownback said. "These are issues properly left to legislative bodies."

Brownback asked no question, and Roberts made no response. Earlier, Roberts declined to give an opinion to a Democratic senator -- Russell Feingold of Wisconsin -- on the constitutionality of proposed federal legislation to prohibit discrimination on the basis of sexual orientation. Roberts offered instead only a personal assurance.

"Personally, I believe everyone should be treated with dignity in this area and with respect," he said.

The Business of the Court

Roberts did give court watchers some intriguing clues about how he will manage the court's business if confirmed. Most significantly perhaps, he volunteered his view that the court should be deciding more cases. Under Rehnquist, the court reduced the number of decisions from around 150 per year in the mid-1980s to around 75 per year more recently.

"I do think there's room for the court to take more cases," Roberts said. "They could contribute more to the uniformity and clarity of the law by taking more cases."

In addition, Roberts indicated -- possibly facetiously -- an open mind on televising Supreme Court proceedings. "My new best friend, Fred Thompson, has assured me that television is nothing to be afraid of," Roberts said, referring to the former senator and current TV actor who is helping shepherd his nomination through the Senate. Roberts also repeated an earlier answer, however, that he has "no set view" on the issue.

A Touch of Humor

The hearings on Wednesday had a more relaxed pace and tone than on Tuesday. Biden, who raised eyebrows on Tuesday by interrupting Roberts' answers, opened on Wednesday, "I promise I won't interrupt if you give short answers." "I'll try, senator," Roberts said with a smile.

Roberts also showed another trace of humor on the stand. When Sen. Tom Coburn (R-OK) asked what Congress could do to make it easier for courts to interpret statutes, he quipped: "Sitting where I am, I am not terribly inclined to be critical."