Chicago Blues Reunion is an all-star lineup of Chicago music legends who have defined the sound of blues since the 1960s. Buried Alive in the Blues is the new CD/DVD set they've just released. 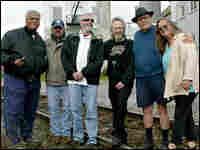