Accessibility links
Mississippi Rural Areas Still Without Power In Mississippi, electricity and phone service have been restored to most of the people affected by Hurricane Katrina. Those still without service are either in rural areas, or in places so devastated by the storm, there's not much left to connect to.

In Mississippi, electricity and phone service have been restored to most of the people affected by Hurricane Katrina. Those still without service are either in rural areas, or in places so devastated by the storm, there's not much left to connect to. 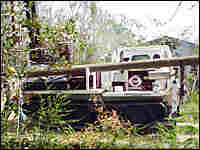 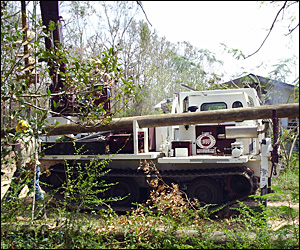 A truck on tank-like treads heads into the backwoods of Crane Creek, Miss., to erect new power poles. Hurricane Katrina toppled 30,000 power poles in the area served by the Coast Electric Power Association.

Electricity and phone service in Mississippi have been restored to most of the people affected by Hurricane Katrina. Those still without service are either in rural areas, harder to reach, or in places so devastated by the storm that there's not much left to connect to. NPR's Howard Berkes went out with repair crews yesterday in rural Mississippi.

The Rural Electric Cooperative responsible for much of the Mississippi region blasted by Hurricane Katrina has had an enormous task. Every one of its 58,000 customers lost service. Stretch out the power lines that fell and they'd reach from New York to San Francisco. That's 30,000 power poles toppled.

Mr. RON BARNES (Coast Electric Power Association): Well, when we first went out, the first two days after the storm and did damage assessment, we could not believe that what took us 65 years to build was washed away in a six- or seven-hour period.

BERKES: Ron Barnes is an executive at Coast Electric Power Association, one of two power companies in the hardest-hit places in Mississippi.

Mr. BARNES: Well, we anticipate right now that we're spending over $3 million a day, and that's for the people that we have here, the material that we're using. You know, we're having to bring in 750 truckloads of poles, over 10,000 transformers, miles and miles and miles, probably 4,000 miles, of line. So we anticipate it's going to cost over $100 million.

BERKES: Some of that money goes to house and feed 3,000 workers from 120 other power companies in 19 states.

BERKES: A crew of three backs a white track truck off a trailer in Crane Creek, Mississippi. Like a tank, the truck runs on tracks so it can get into rough and marshy areas in the backwoods. There was no storm surge here, more than 20 miles from the Gulf Coast, but there were 140-mile-an-hour winds snapping trees and poles. Watching from a porch in the distance are Paul and Lorita(ph) Campos and their five children. They haven't had lights, hot water, a working kitchen or air conditioning in more than two weeks.

Mrs. LORITA CAMPOS (Hurricane Survivor): All these volunteers coming in from other states is making it happen a lot quicker.

BERKES: The Campos family rode out Katrina at home with three other families. They heard tornadoes drop from the sky, trees snap and fall, and their tin roof peel away.

BERKES: Twelve thousand Coast Electric customers still don't have power. Rural areas have fewer power users per mile, so it takes more poles and lines per customer to restore service. The company's Ron Barnes says some should have electricity next week, but most, he notes, won't return as customers. That's because they don't have homes or businesses now to connect to the power grid.

Mr. BARNES: Yeah, we'll have our facilities available, but there simply, in so many cases, just is not a house left, or it is in such bad disrepair that it will most likely have to be bulldozed.