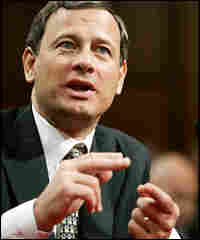 Democratic members of the Senate Judiciary Committee grill chief justice nominee John Roberts about his views on issues from cloning to discrimination. The morning session completed nearly 20 hours of testimony from Roberts over four days.

After Roberts completed his appearance at midday, the panel heard witnesses for and against approving him to be chief justice. The committee is scheduled to hold a vote on the nomination next week.

In their final remarks, Sens. Diane Feinstein and Chuck Schumer each expressed their doubts over Roberts' views -- and their frustration with a process in which prospective justices often refuse to expose their thinking on critical issues.