Accessibility links
Roberts' Confirmation Hearings Conclude The Senate Judiciary Committee concluded hearings Thursday on the nomination of John Roberts to be the next chief justice of the United States. In his final day before the panel, Roberts did not provide any additional insight into his views, saying his loyalty was only to the rule of law. 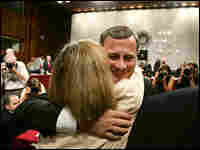 Supreme Court nominee John G. Roberts Jr. finished 17 hours in the witness chair Thursday much as he began, declaring his loyalty is only to the law. Just as in his opening statement Monday, he said he was without an "agenda;" Roberts concluded on Thursday by declaring himself no "ideologue."

Roberts ended his personal appearance before the Senate Judiciary Committee on rhetorical high notes, aiming to answer concerns raised by Democratic senators and liberal interest groups during a week of confirmation hearings.

The Republican-majority committee closed the confirmation hearings eight hours later, after interest groups testified for and against President Bush's nomination of Roberts as chief justice. Despite the strong opposition of several liberal groups, Roberts is universally expected to win confirmation by a solid margin. The committee will vote on his nomination Sept. 22; the full Senate will take it up the following week.

In his final answers to the committee, Roberts cited his career as a lawyer and, for the past two years, as a federal appeals court judge to try to reinforce his testimony from two previous days that he has no political agenda or fixed judicial philosophy.

Answering a question from Sen. Richard Durbin (D-IL), Roberts said he represented clients on both sides of various issues, and had never turned a client away for ethical or moral reasons.

"I appreciate that may sound like I'm a hired gun," Roberts said. "I think that's a disparaging way to regard what is in fact an ennobling truth: that lawyers serve the rule of law."

Loyal Only to the Law, Says Roberts

Earlier, Roberts pointed to the 50 opinions he has written on the federal appeals court bench in Washington to answer a question from Sen. Charles Schumer (D-NY):whether he would be "an ideologue" on the Supreme Court.

"I don't think you can read those opinions and say, 'These are the opinions of an ideologue,'" Roberts said. "That should convince you that I am not an ideologue. And you and I agree that is not the kind of person you want" on the Supreme Court.

Senators got little new information in the final two hours of questioning Roberts before hearing from public witnesses. In an afternoon-long session, some 30 witnesses, evenly divided between people chosen by Republicans or by Democrats, testified before the panel.

Witnesses from liberal women's rights and civil rights groups urged a "No" vote on Roberts, depicting him as opposed to civil rights as a lawyer in the Reagan and first Bush administrations and insensitive to such issues today.

"We have heard nothing to demonstrate his commitment" to civil rights, said Wade Henderson, executive director of the Leadership Conference on Civil Rights.

But several lawyers who worked with Roberts in the solicitor general's office or in private practice -- including some who identified themselves as Democrats -- strongly endorsed Roberts and disputed characterizations of him as hostile to civil rights or ideologically driven.

"There's no hostility there to civil rights," said Dick Thornburgh, who served as attorney general in the first Bush administration while Roberts was principal deputy in the solicitor general's office. "There's a veneration of the rule of law."

The Struggle Over Abortion

The hearing ended on the one issue -- abortion -- that has dominated all discussion of the Supreme Court ever since Justice Sandra Day O'Connor announced her retirement on July 1. Bush originally named Roberts to succeed O'Connor and then decided instead to nominate him to lead the court after the death of Chief Justice William H. Rehnquist on Sept. 3.

With the high court still closely divided on abortion issues, women's groups warned that Roberts could cast the decisive vote in narrowing or overturning those decisions. Under persistent questioning, Roberts would go only so far as to say that the later decision, Casey, is a "precedent entitled to respect" under the legal doctrine known as stare decisis. That doctrine generally calls for upholding past rulings, but it also permits decisions to be thrown out based on consideration of various factors.

"We listened very, very closely, hoping to find some reasons to put our fears to rest," said Marcia Greenberger, co-president of the National Women's Law Center. Greenberger said she heard Roberts give "a very articulate explanation" of the factors in applying stare decisis, but "no indication how he would apply those factors."

Democratic senators made plain throughout the hearing that they shared fears that Roberts will vote against abortion rights if confirmed. But anti-abortion Republican senators wrapped up the late-night session on Thursday by professing no certainty of how Roberts will vote.

"I personally don't know how Judge Roberts stands on that," Sen. Orrin Hatch (R-UT) said. "I don't think anyone does."

Roberts won bipartisan praise for his intellect, legal knowledge, and personal charm. But Democrats criticized conservative positions he had taken as a lawyer in the Reagan and first Bush administrations and faulted him for not disavowing any of those views now.

Committee Chairman Arlen Specter (R-PA) and ranking Democrat Patrick Leahy of Vermont both said they would decide how to vote over the weekend and announce their positions early next week. The other nine Republicans on the panel left few doubts that they will vote in Roberts' favor.

Several Democrats took the opportunity in their final questioning of Roberts on Thursday to say that they were still undecided. Schumer used his turn to list three factors in Roberts' favor, including his intellect and his philosophy of "judicial modesty and stability," and three unfavorable factors, including a lack of compassion in his answers on civil rights.

"This is not just a roll of the dice," Schumer said, picking up a phrase used the previous day by Sen. Joseph Biden (D-DE). "This is betting the whole house."