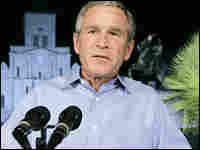 President Bush spoke about repairing the damage done to the Gulf Coast by Hurricane Katrina in a speech from Jackson Square in New Orleans. Reuters hide caption

The rebuilding of the devastated Gulf Coast region is one of the largest reconstruction efforts the world has ever seen, President Bush said in an address to the nation Thursday. In a primetime speech, Bush detailed how the federal government would support that effort.

Speaking from the French Quarter of New Orleans, the president outlined a number of federal programs to rebuild the Gulf Coast. They include emergency help for evacuees to pay for food, clothing, and shelter.

The efforts are needed to help a region devastated by the Category 5 Hurricane Katrina. President Bush promised New Orleans would be at the center of the government's plan. "This great city will rise again," Bush said.

Several initiatives unveiled in the president's speech would provide tax breaks for area businesses, along with federal funds for rebuilding roads and bridges damaged by the storm and the flooding that followed.

The president also reached out to the communities that have been the most visibly hit, pledging to ensure that minorities and those who were living in poverty even before Katrina struck would take part in -- and benefit from -- the rebuilding effort.

Acknowledging that the initial federal response to the emergency was ineffective, President Bush said he was grateful for the work of relief workers -- as well as the people around the country who have moved to give help to those displaced by the crisis.