Accessibility links
Afghanistan Officials Call Election a Success Millions of Afghans vote for a new parliament despite the surge of violence in the weeks leading to the election. There were reportedly several dozen Taliban attacks in the country's south and east, and two rockets landed near an election center in Kabul. But officials said the election overall was remarkably peaceful.

Millions of Afghans vote for a new parliament despite the surge of violence in the weeks leading to the election. There were reportedly several dozen Taliban attacks in the country's south and east, and two rockets landed near an election center in Kabul. But officials said the election overall was remarkably peaceful. 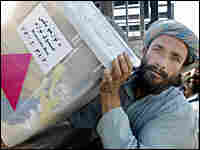 Afghanistan made it through an election yesterday without any major disruptions, at least by Afghan standards. There were scattered Taliban attacks and a lower turnout than expected. Now, authorities have to collect and count the ballots. NPR's Philip Reeves has been covering the story from Kabul and elsewhere.

And, Philip, what did you see at the polling places yesterday?

Well, in Kabul, it was obvious that the turnout was going to be low. I went to one station an hour after polls had opened and only 50 people had voted. But I then traveled up to the Panjshir Valley, north of Kabul, a largely Tajik area, and there people were voting in significant numbers, not least because the Tajiks are a minority, want to, try to acquire a block of power in parliament to counterbalance what they say is a Pashtun-governated Karzai administration in Afghanistan.

INSKEEP: And, so what were the turnout figures?

REEVES: Well, the electoral authorities has said this morning that the turnout was just over 50 percent, that's a big drop on the presidential election of last year when the turnout was roughly 70 percent. But it's not by any means a disastrous figure. Election officials had, though, been confidently predicting a high turnout and this didn't materialize.

INSKEEP: Now it's very interesting to hear what you say because you do have a country that is divided along ethnic and to some degree religious lines, and you're saying that there's some groups that were more excited about this election than others, or more determined about it.

REEVES: That's true, but there are others issues, too, here, Steve, I think. There's a consensus that the number of candidates was confusing to voters and that that might have put people off, especially in Kabul, where there were nearly 400 candidates for 33 seats. That meant that many people who were illiterate had to find their way around a seven-page ballot paper. Also, according to Afghan and international analysts that I've been talking to today, they're saying that people may well have been deterred by the presence on the ballot of candidates with tainted pasts: warlords, criminals, former members of the pro-Soviet Communist government and so on. There are reports that some of these warlords who were candidates for flexing their muscles at the polling stations--turning up with armed escorts and so forth and after word of this got around, this might have deterred voters. And, of course, in the south and southeast, or the heartland of the Taliban, voters could have been put off by fear of reprisals. We're hearing reports that women were told that they would be in serious trouble if the indelible ink that's used to ensure against multiple voting was seen on their fingers.

REEVES: On paper, it has significant powers. And President Karzai himself has been saying that he, you know, welcomes a strong legislature, even if it opposes him. But these were non-party elections, so it means that at least at the start it will be a collection of 249 individuals, although we can expect blocks to form after that, particularly as I mentioned, a Tajik block. But the parliament will need to prove itself effective. All the Afghan public's already evident misgivings about what it is will probably deepen and that won't make the difficult process of rebuilding Afghanistan any easier.

INSKEEP: And does the seating of this parliament mean that Afghanistan will become a fully independent country again?

REEVES: Well, it's one of the final steps in the Bonn Agreement, and that's, you know, charted out a timetable for transition to a sovereign democratic state. Still got to have district elections and to establish parliament's upper house, and a lot needs to be done on the ground in terms of education, security, reconstruction and jobs. One of the issues that President Karzai and his administration will now be looking at even more closely is securing commitments from the international community of further support. And you can expect to see a follow-on conference of donor countries addressing this issue, probably at the end of the year.

INSKEEP: And I know you'll be watching that. NPR's Philip Reeves is in Kabul, Afghanistan.