Accessibility links
Unleashing the Power of Creativity Bill Gates founded Microsoft on the dream of putting a computer in every home and office. He says he built his company on the belief that technology, creativity and intelligence can change the world.

Listen
Unleashing the Power of Creativity

I've always been an optimist and I suppose that is rooted in my belief that the power of creativity and intelligence can make the world a better place. 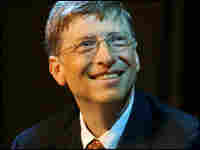 For as long as I can remember, I've loved learning new things and solving problems. So when I sat down at a computer for the first time in seventh grade, I was hooked. It was a clunky old Teletype machine and it could barely do anything compared to the computers we have today. But it changed my life.

When my friend Paul Allen and I started Microsoft 30 years ago, we had a vision of "a computer on every desk and in every home," which probably sounded a little too optimistic at a time when most computers were the size of refrigerators. But we believed that personal computers would change the world. And they have.

And after 30 years, I'm still as inspired by computers as I was back in seventh grade.

I believe that computers are the most incredible tool we can use to feed our curiosity and inventiveness -- to help us solve problems that even the smartest people couldn't solve on their own.

Computers have transformed how we learn, giving kids everywhere a window into all of the world's knowledge. They're helping us build communities around the things we care about and to stay close to the people who are important to us, no matter where they are.

Like my friend Warren Buffett, I feel particularly lucky to do something every day that I love to do. He calls it "tap-dancing to work." My job at Microsoft is as challenging as ever, but what makes me "tap-dance to work" is when we show people something new, like a computer that can recognize your handwriting or your speech, or one that can store a lifetime's worth of photos, and they say, "I didn't know you could do that with a PC!"

But for all the cool things that a person can do with a PC, there are lots of other ways we can put our creativity and intelligence to work to improve our world. There are still far too many people in the world whose most basic needs go unmet. Every year, for example, millions of people die from diseases that are easy to prevent or treat in the developed world.

I believe that my own good fortune brings with it a responsibility to give back to the world. My wife, Melinda, and I have committed to improving health and education in a way that can help as many people as possible.

I'm still very much an optimist, and I believe that progress on even the world's toughest problems is possible -- and it's happening every day. We're seeing new drugs for deadly diseases, new diagnostic tools, and new attention paid to the health problems in the developing world.

I'm excited by the possibilities I see for medicine, for education and, of course, for technology. And I believe that through our natural inventiveness, creativity and willingness to solve tough problems, we're going to make some amazing achievements in all these areas in my lifetime.