Accessibility links
A Happy Ending for Lady and Sasha Reporter Scott Horsley was with two fishermen who saved some four-legged survivors of Hurricane Katrina in Louisiana's flooded St. Bernard Parish. He follows up on the happy reunions between two families and their best friends.

A Happy Ending for Lady and Sasha

A Happy Ending for Lady and Sasha 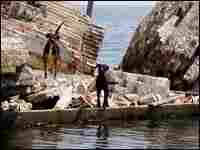 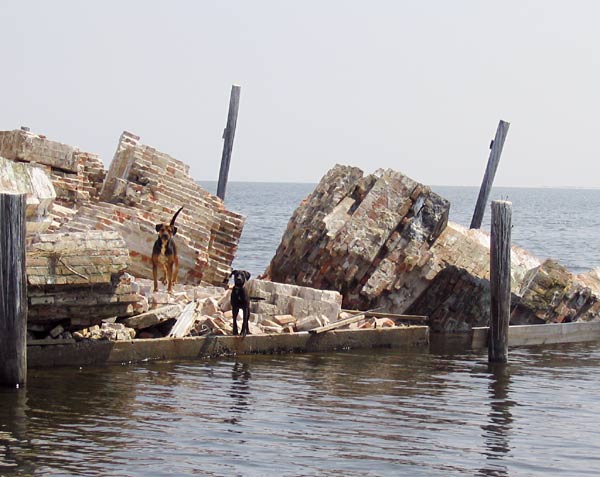 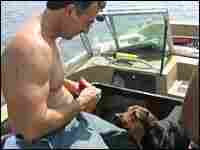 After as many as 15 days without food, Sasha wolfs down a package of sardines offered by fisherman George Barasich. Scott Horsley, NPR hide caption 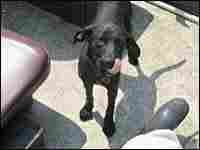 Louisiana residents are tough. And that includes the four-legged ones.

I came across Lady and Sasha while exploring the waters off St. Bernard Parish with two fishermen, George Barasich and Frank Campo, Jr. They'd offered to give me a tour of the Violet Canal and the Mississippi River Gulf Outflow, which will have to be cleared of all kinds of debris before it's safe to move their fishing boats.

We were approaching the flooded ruins of a 19th century fort when, to our surprise, we spotted a dog on top of the rubble. As we approached in a small boat, a second dog appeared. After a little coaxing, they both jumped in the water and gratefully swam towards us.

Once on board, the two dogs wolfed down several tins of sardines. They were skinny and half-starved, but apparently in good shape.

"They sure are friendly," I said.

"Wouldn't you be?" Frank answered wisely.

We drove the dogs to Baton Rouge, where George is living temporarily because his home in St. Bernard Parish was flooded. Arriving late Friday night, we delivered the dogs to the emergency animals shelter set up on the campus of Louisiana State University. The good folks there were kind enough to take them in, even though they'd officially "closed"” an hour earlier.

The smaller dog -- a young black lab -- had a tag that identified her as "Lady" and gave a telephone number in St. Bernard Parish. We were able to trace the number to Shea and Bret Tessitore of Chalmette, La. But with Chalmette largely deserted after the storm, there was no telling where the Tessitores were now.

The larger dog -- a shepherd mix -- wore no tags. And although she had a microchip, the owners were not registered. The chip had been implanted at the St. Bernard Parish animal shelter. Chances are, any records they had are now underwater.

As George and I left the shelter, the dogs were getting a decontamination bath. They looked a little woebegone, but we felt sure they would be OK.

On Saturday, NPR librarian Kee Malesky went to work trying to locate the Tessitores. But it was a chance look at the Times-Picayune website that found them. Shea and Bret had all but given up looking when a relative spotted a notice the shelter had placed on the Web site, saying Lady had been found. Bret was greatly relieved, of course. "That was the last member of my family I needed to find," he said.

He and his wife have taken up residence in Olive Branch, Miss. But her father lives close to Baton Rouge. They're hoping to retrieve Lady this week.

The Tessitore's also recognized the other dog, Sasha, as belonging to their Chalmette neighbors, Linda and Timmy Hebert. They're now living in Fairmont, W. Va., where Timmy was reassigned by the Army Corps of Engineers. He can't wait until his daughter sees Sasha, since the dog was really hers.

Both the Tessitores and the Heberts had been trapped by rising floodwaters during the hurricane. They spent four days camping with their dogs on high ground near the Violet Canal. When rescuers finally arrived, they had to leave the dogs behind. Neither knows for sure how Lady and Sasha wound up on the island formed by that old fort. Obviously, the dogs are survivors. Just like their owners.