Accessibility links
Life with Lou Gehrig's Disease About two years ago, commentator Darcy Wakefield was diagnosed with ALS, or Lou Gehrig's disease, at age 33. A few months later, she wrote a commentary about running — and losing her ability to do it. Since then, her disease has progressed, sometimes in ways she didn't anticipate. Her sister Betsy reads this commentary for her. Wakefield has just released a book, I Remember Running.

About two years ago, commentator Darcy Wakefield was diagnosed with ALS, or Lou Gehrig's disease, at age 33. A few months later, she wrote a commentary about running — and losing her ability to do it. Since then, her disease has progressed, sometimes in ways she didn't anticipate. Her sister Betsy reads this commentary for her. Wakefield has just released a book, I Remember Running.

About two years ago, commentator Darcy Wakefield was diagnosed wit ALS, Lou Gehrig's disease, at the age of 33. A few months later, she wrote a commentary about losing her ability to run. Since then, her disease has progressed, sometimes in ways she did not anticipate. She asked her sister Betsy to read this commentary for her.

I haven't been sleeping much lately. I wake every few hours, panicked that the comforter is too near my face and I'll suffocate. I want to turn over, but I can't. My arms, they're useless. I wrap them around myself, and when I untangle them, they're no help. I would love to scream out, but I'm losing my voice. When I was diagnosed with ALS, I read extensively about it. I learned about ventilators, feeding tubes, power wheelchairs, but nothing prepared me for being unable to turn over.

This has been one of the scariest side effects of my disease thus far. I understand now what sort of fear gave birth to the expression, `I was scared out of my mind.' Nights when I wake up, I am frantic to rouse my partner Steve and feel the cold air that indicates he's pushed back the covers and will turn me over. At those times, 11 PM, 2 AM, 4 AM, whenever, we each whisper, `I can't keep doing this.'

The bed is my enemy. I fear it. Until recently, I've loved going to bed. When I wasn't sleeping on my bed, I was sprawled on it, reading books or grading student papers or talking on the phone. In the weeks before and after my diagnosis, my bed was a safe harbor for me. Lulled to sleep by lorazepam, I almost could forget about ALS. Five months after my diagnosis, when Steve and I moved in together, I gave up my futon for Steve's grown-up bed and swapped the lorazepam for Steve's strong arms.

But I couldn't trade the ALS. And then slowly, the bed became less comfortable. I think this is how it is with the ALS that I have. I am gradually losing the ability to do many things, but it happens so slowly that I am almost not aware of it until it happens. One day, I had a hard time getting up from the couch. A few days later, I couldn't get up from the dinner table. Then I had problems getting off the toilet. So the other night, when I reached out my left arm to wrap it around Steve, I wasn't shocked when I couldn't do it, but it was 2 AM. It was dark, and it was just me, alone in my brain. So I stayed awake for a while, longing to hold Steve, wanting him to hold me, wanting the ALS to go away.

In these early hours, my losses add up too fast for me, and my brain scrambles to focus on something, anything else. So the other night, my mind returned to some of the mountains I've climbed. One of my favorites is a loop trail at Tumbledown Mountain in Weld, Maine. The only part of the hike I dread is a narrow passageway carved between two large boulders on the way up. It's called Fat Man's Squeeze. I hate how tight the squeeze is, and I hate how claustrophobic I feel jammed in between the rocks. The only thing that keeps me moving up the handholds to the top of the squeeze is the knowledge that soon I will emerge into the light, and a spectacular view awaits me.

Lately, going to bed every night has been like climbing the Fat Man's Squeeze over and over and never reaching the top. I long to reach the land handhold, the end of the squeeze, and poke my head out from between the rocks and into the sunshine.

NORRIS: Betsy Wakefield with a commentary written by her sister Darcy Wakefield. Darcy has a new book titled "I Remember Running."

MELISSA BLOCK (Host): You're listening to ALL THINGS CONSIDERED from NPR News. 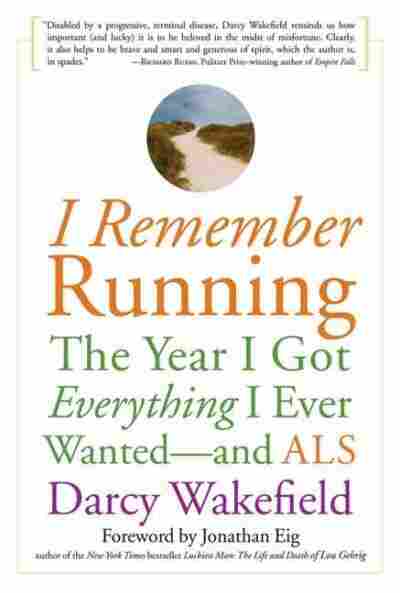 The Year I Got Everything I Ever Wanted —and ALs

by Darcy Wakefield and Jonathan Eig