Accessibility links
Anoushka Shankar's Turn to 'Rise' The daughter of sitar master Ravi Shankar and sister of Grammy-winning jazz singer Norah Jones, Anoushka Shankar has an impeccable musical pedigree. On her new CD, Rise, she mixes a range of styles and instruments to create a sensual, ethereal sound. 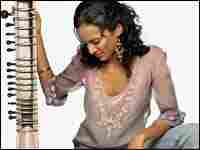 At 24, Anoushka Shankar has been touring with her father, Ravi Shankar, for a decade. Pamela Springsteen hide caption 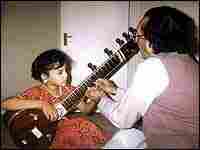 A young Anoushka Shankar gets sitar lessons from her father, Ravi Shankar, in 1989. Shankar had a diminutive version of the instrument made for his daughter when she was 7. Courtesy Anoushka Shankar hide caption 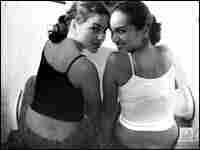 Anoushka Shankar and sister Norah Jones show off the tattoos they got together in December 1999. © Vincent Limongelli hide caption

Anoushka Shankar has an impeccable musical pedigree. Her father, Ravi Shankar, is a sitar master. Her half-sister, Norah Jones, is a Grammy-winning pop-jazz singer. Now, Anoushka Shankar carves out her own sound on a new CD, Rise.

When Shankar was just 7 years old, her father had a special, small sitar made for her. Soon, Ravi Shankar began teaching his child to play the long-necked string instrument. At age 24, Anoushka Shankar has been touring and performing classical Indian music with her father for a decade.

She took a break from touring to create Rise, spending nearly a year writing and arranging all of the music on the album, as well as producing and editing it. She also performs on the release, playing sitar and keyboards.

On Rise, Shankar moves beyond the classical tradition of her father, mixing up a broad range of world music styles and instruments -- flamenco piano, Indian slide guitar, electronic sounds, and, of course, the sitar. The result is a sensual, ethereal sound.

"I really am a fan of combining worlds in my own life," Shankar says. "I live in the modern world, and I appreciate the most cutting-edge parts of it. But I also like to check out as much as I can… I think with this album and getting time off, it really was a question of finally making time for my music to reflect a little more of me."