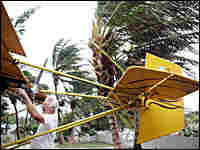 Thousands of evacuees from Hurricane Katrina were moving again today, this time from Texas to Arkansas, Tennessee and Nebraska, as Hurricane Rita threatened the already battered Gulf Coast. Forecasters at the National Hurricane Center say Rita may build to a Category 4 hurricane by tomorrow afternoon. Storm preparations geared up again all the way west to Galveston Bay, Texas.

Mayor RAY NAGIN (Democrat, New Orleans): Just hold on for a little longer. As soon as we get comfortable that Rita is clear of landfall in Louisiana, where we won't have any major impact, we will get back to our re-entry program as outlined. It may be a little more spaced, but we fully intend to follow through on some of the things that we talked about.

NORRIS: Mayor Nagin said many people still in the city were going to the convention center, where buses are stationed to take them to other cities and states. Nagin said that two busloads had already left.

Mayor NAGIN: Well, you know, I think we're learning as we go. And I think the federal government, the state government and local government, we're a lot smarter this time around. We've been through it before. We've learned a lot of hard lessons, and now we fully understand what it takes to mobilize under the threat of a significant hurricane that hits a major urban area. So we're much better prepared this time.

BLOCK: Vice Admiral Thad Allen of the Coast Guard has been leading the federal response to Hurricane Katrina in the Gulf. In an interview this morning, Allen talked with us about the prospect of a hit from Hurricane Rita.

Vice Admiral THAD ALLEN (United States Coast Guard): We are developing what we call a continuity-of-operations plan, and that would be a--several parts to that: One would be a residual force that you would leave here to be able to respond after the event, and then where you would move the other forces that are not critical back a ways from the potential exposure to the storm.

BLOCK: In terms of the residents who've come back to New Orleans and the surrounding parishes, it's not entirely clear what they're supposed to do here. Mayor Ray Nagin said yesterday that a mandatory evacuation would begin on Wednesday, but he also said, `I'm encouraging everyone to leave,' which sounds like a far weaker order. Which one is it?

Vice Adm. ALLEN: Well, you know, in advance of the previous storm with Katrina, the mayor issued a mandatory evacuation order. Those orders indicate that people should not expect there'll be any services left if they don't leave. But, quite frankly, there were a lot of people who did not leave the city, that remained and still remain as of today. What local officials decide to do about it is local law enforcement decision. We just need to take that into account when we're planning for the response.

BLOCK: You call this a local law enforcement decision, but the mayor also said that he would expect active-duty soldiers and National Guard to help enforce an evacuation order. The Pentagon's saying, `We don't forcibly evacuate anybody; that's a law enforcement job.' What exactly is the military's role here?

Vice Adm. ALLEN: Well, they talk about DOD forces being in the city as always, always in support of local, federal officials. If there were a need to conduct an evacuation from the city--and you've got to understand that New Orleans has no internal communications, no telephones, no 911 system, so anybody that's still in the city or may have gotten back into the city, there is no way to broadcast to them that there may be a threat out there. So the potential would exist to be able to use DOD forces to go through and sweep the city house by house but this time making notifications that they need to leave because of an approaching storm.

BLOCK: If you had your druthers in terms of the repopulation of New Orleans--you were adamant over the weekend in saying that it was too early for Mayor Nagin to be doing what he was doing, which was encouraging people to come back--would you rather wait until after hurricane season is entirely over, wait till the end of November to bring people back?

Vice Adm. ALLEN: Well, I think you've got a weakened levee system, and as long as you've got the threat of a hurricane, you're going to have the problem with notification and evacuation if anything occurs, you know. But beyond that, even a significant rain event could cause a problem with the weakened levee system. So I'm not sure I would associate it just with the hurricane season. I've asked for projections from the Corps of Engineers--and they've provide them to me--to give me scenarios of what would happen with a three-inch rainfall, a six-inch rainfall and a nine-inch rainfall, for example. And under any of those scenarios, with the lack of pumping capability and the weakened levee system, any extreme weather event, even if it wasn't a hurricane, could cause a problem in the city.

BLOCK: How weakened are those levees? How compromised have they become?

Vice Adm. ALLEN: There were two things that happened to the levee systems. One is what the Corps of Engineers would call overtopping. That's where you basically have--water just comes over the top either due to a storm surge or the height of Lake Pontchartrain, Mississippi River or whatever. The second one is the erosive or the scalloping effect of water that comes back into canals driven from the lake, which is what happened during Katrina, and it weakens the levees from below. What the Corps of Engineers is all about right now is doing a comprehensive survey of the entire levee system in and around New Orleans with some very sophisticated sensing equipment to ascertain what I would call the physical baseline from which they're going to have to rebuild the levee system that will support New Orleans in the future.

BLOCK: You know, over the weekend, when you were critical of Mayor Ray Nagin's decision to encourage people to come back, he took umbrage at those comments of yours. He said of you, `Maybe he's the new crowned federal mayor of New Orleans. When he starts talking to the citizens of New Orleans,' he said, `that's kind of out of his lane. There's one mayor of New Orleans and I'm it.' Why do you figure you and the mayor are not on the same page here?

Vice Adm. ALLEN: Oh, I think the mayor and I are on the same page. I met with him yesterday after the events of the weekend, and I can tell you moving forward we are lockstep on where New Orleans needs to move in the future, I think. And you got to understand the mayor has got some significant issues he's got to deal with. He's got a city that has to be rebuilt. He's got no revenue base. The infrastructure has been decimated. And he needs to be about the business of regenerating the city and restarting it. Nobody, nobody, argues with that vision, and nobody, myself included, argues with the fact that he is the mayor of New Orleans. I am not the elected mayor of New Orleans.

The final decision on re-entry would be and will be and will continue to be the mayor's decision, but we just think that needs to be the best-informed decision possible. And it didn't appear to us on the time table that he had laid out that re-entry of the general population was going to be in the best interest of the folks in New Orleans. And the final litmus test on that is: Would you bring your family into that environment? And I would not bring my family into it.

BLOCK: I believe the mayor's family's in Dallas. Is that right?

BLOCK: It does seem that there are some pretty clear tensions that are coming out in some of these comments.

Vice Adm. ALLEN: I don't think so. I mean, this is a tough problem set on ground. I don't think there's ever been--well, we've had events in the history of the United States where an entire city's been taken down. You had the Chicago fire and the San Francisco earthquake, but none has ever happened in recent history where you have the complexity of the infrastructure, the density of population. And what you had was basically a city that was totally taken down, and all of the first responders and the folks in the city that were trying to assist the citizens became victims themselves. Recovery from that is just a huge, huge effort, and we are working on that together.

BLOCK: Admiral Allen, thanks for talking with us today.

BLOCK: Vice Admiral Thad Allen is heading up the federal response to Hurricane Katrina in the Gulf. He spoke with us from New Orleans.