Accessibility links
A Salute to Sonny Rollins on His 75th Birthday When jazz saxophone legend Sonny Rollins turned 75, his record label marked the occasion with a new CD, Without a Song. Rollins recorded the album live in concert days after the Sept. 11, 2001 attacks. For Rollins and his bandmates, the concert showed the healing power of music.

Listen
A Salute to Sonny Rollins on His 75th Birthday

When jazz saxophone legend Sonny Rollins turned 75, his record label marked the occasion with a new CD, Without a Song. Rollins recorded the album live in concert days after the Sept. 11, 2001 attacks. For Rollins and his bandmates, the concert showed the healing power of music. 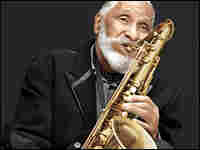 It's not easy being a giant. Just ask Sonny Rollins, who, for decades, has tried to live up to the billing as one of the truly big men of jazz. When he turned 75 this year, his record label marked the occasion by releasing a new CD. It's called "Without a Song." As NPR's Roy Hurst found out, Rollins' latest recording, like his previous works, didn't come easy.

When Sonny Rollins first appeared on the jazz scene in the late 1940s, he was quickly dubbed a genius of the tenor sax, the future of the music, the saxophone colossus. Now at 75, the accolades haven't stopped. Saxophonist Branford Marsalis called him, with the exception of Louis Armstrong, `the greatest improviser in the history of jazz.'

Mr. SONNY ROLLINS (Musician): OK, OK. If you agree with that, right.

HURST: The one thing you realize when talking with Sonny Rollins is that he doesn't like to talk about himself. He's especially impatient with compliments. He says he's too busy trying to get better.

Mr. ROLLINS: I put high demands on myself. I've been around a lot of great musicians, and I know what great music is, so I don't really get too involved with contemplating those opinions of me. I mean, vanity can only take you so far.

HURST: So in order to get to the core of what makes the greatest living sax player tick, you might do well to go back to the original source of his inspiration.

HURST: In 1940, Rollins was a 10-year-old kid running the streets of Harlem when he came across Hawkins' revolutionary recording of the song "Body and Soul."

Mr. ROLLINS: Which was strictly saxophone; saxophone solo with the orchestra in the back.

Mr. ROLLINS: He was improvising. That, in itself, was significant, that it wasn't somebody singing. It wasn't more obvious, accessible music. This was really difficult, highly artistic music; improvisational music, at its highest level, played on a saxophone.

Mr. ROLLINS: When I heard that, you know, the intellectual possibilities of jazz improvisation put a light into my head. I realized then that the saxophone can be earthy and bluesy, but it also could be intellectual; the science of improvisation on a high level--I mean, all of those are things that I began to aspire to myself.

(Soundbite of "Body and Soul")

HURST: This is a Sonny Rollins version of "Body and Soul," circa 1958.

(Soundbite of "Body and Soul")

HURST: By the time of this recording, Rollins was at the top of the jazz world. At the same time, John Coltrane was emerging as a brilliant young tenor player with a fresh new sound of his own. The two men bonded.

HURST: This is the only example of a Coltrane-Rollins recording. It's a hard-driving tune called "Tenor Madness."

HURST: But Sonny Rollins was beginning to buckle under the pressure of his own great expectations. He had begun to agonize over his own playing. It all finally came to a head one night at a concert in Baltimore.

Mr. ROLLINS: Everybody was so excited, `Sonny Rollins is going to be here, Sonny Rollins.' And I wasn't feeling right about my playing, I mean, I just wasn't getting into, and that night, you know, I actually disappointed the crowd and that I felt so drugged about that, that I said, `Well, look, this is it. I don't care how much people are trying to hype me up. That's it, I'm getting out of here for a while and getting back in the woodshed.'

HURST: Woodshed--synonym for intense private study. Look up the word and you may find a picture of Rollins. Practice is what he's known for. Rollins suddenly dropped out of the music scene altogether. And for a time, his horn could only be heard searching for something on the Williamsburg Bridge over the East River.

Mr. ROLLINS: It was a perfect place to practice. There was a spot there where the cars couldn't see me. It was just perfect.

HURST: When Rollins finally returned to the music scene in 1962, he did so to more critical acclaim and, more importantly for him, he felt new and improved. But critics had begun to divide the jazz saxophone into two camps: the school of Sonny Rollins on the one hand and of John Coltrane on the other. Now when Coltrane was praised, Sonny Rollins got put down.

Mr. ROLLINS: There was a period there when I sort of got caught up in that, the way people thought of us as competitors and adversaries and all of that, the negative emotion of feeling that, `Oh, gee, well, I should have more recognition than Coltrane' and this kind of a--you know, this type of attitude, you know. I mean, it was--some people might say it's human, but, yeah, a lot of things are human, but, you know, I don't want to be human. I want to be better than human.

HURST: Today Sonny Rollins is reluctantly taking part in public celebrations marking his 75th year. He has a new CD out, and he can still sell out concert halls whenever he feels like it.

HURST: And that isn't often enough for promoters. Still, he practices several hours each day. He says his life is about one thing and one thing only.

GORDON: Thanks for joining us. That's our program for today. NEWS & NOTES was created by NPR News and the African-American Public Radio Consortium.