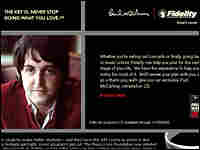 See the Fidelity Ad and Stevenson's Article 'Paul McCartney? Is That You?'

It used to be big news when beloved singers or bands licensed their songs for advertising. But Seth Stevenson, ad critic for the online magazine Slate, says the novelty of such news is officially over and that would be thanks to the release of a new TV spot featuring Paul McCartney.

SETH STEVENSON (Slate): The ad is for Fidelity Investments, and it debuted during the NFL season opener a couple of weeks ago. Immediately, the British press was all over McCartney, even though the spot hasn't run in the UK. Several stories trotted out a 2002 statement in which McCartney claimed, `We do not peddle sneakers, pantyhose or anything else.' A typical headline was `Rubber Sold.' In this country, The Miami Herald titled its piece `Sir Paul Sells Out.'

So what's all the fuss about? The spot kicks off with a black-and-white photo of a young Paul. His last name is never mentioned, nor does it need to be for the ad's target demographic.

Unidentified Man: This is Paul. He's been a Quarryman, Beatle, Wing, poet, father, front man, producer, business mogul, painter and, if that weren't enough, a knight.

Unidentified Man: The key is never stop doing what you love.

STEVENSON: On screen, we see a combination of stills, concert footage and home movies of Paul through the years, each designed to pull at a baby boomer's heart. Eventually, we find out what's being advertised here.

Unidentified Man: Call us today. We'll help you plan for the next part of your life. Fidelity Investments, smart move.

STEVENSON: The Fidelity ad never shows McCartney talking into the camera about how terrific his IRA is or about the great returns he got on some municipal bonds. So to address your first question: Yes, Paul has sold out, but I'm not sure the concept of selling out has all that much traction anymore. The battle is over and the sellouts have won. At this point, about 97 percent of songs by The Who have been used in automobile ads. The Rolling Stones appear in ads for AmeriQuest, a mortgage services company. Bob Dylan made a cameo in a spot for Victoria's Secret underwear. And it's not just geezers. When I talk to younger people, the sellout label seems not to exist anymore. They expect TV ads to introduce great new music. To them, endorsement deals just seem like a natural byproduct of fame and nothing to get worked up over.

Me, I'm not quite post-integrity yet. Part of me continues to wince when artistic heroes get sucked into the marketing machine. It makes me wonder what their work really means to them. It makes me contemplate the force of greed. Bottom line? It's just sort of a bummer.

But another question lingers: Why would Paul do it? When Dylan popped up in a bizarre lingerie ad, it seemed to be in large part just an impish provocation in tune with Dylan's well-known penchant for mischief. But there's nothing impish about index funds. And Paul doesn't need the money; he has a net worth of $1.5 billion. I think Paul's driving desire here is for relevance. This is a way for Paul to say, `Remember that bloke in the home movie clips, they guy you loved so much? I'm still here. I've got a fresh new album, and I hope you'll actually listen to it.'

It's odd that one of the most famous figures of the 20th century is doing mutual fund ads just to stay in the public eye, but that's showbiz. And can we really consider it selling out when what you crave above all else is to put your new art in front of your audience? I give the ad a B. This ad does help set Fidelity apart, but there's a gaping disconnect here. How did we go from marveling at the life of a billionaire genius to setting up a retirement account?

ADAMS: Opinion from Seth Stevenson, who reviews ads for the online magazine Slate.

DAY TO DAY returns in a moment. I'm Noah Adams.