Accessibility links
As Rita Churns Onward, Gulf Residents Prepare Hurricane Rita gains strength as it moves across the Gulf of Mexico on a path toward Texas, prompting mandatory evacuation orders for much of the Texas coast. But its path may mean New Orleans experiences only rain and wind. Even so, the city continues its evacuation.

Hurricane Rita gains strength as it moves across the Gulf of Mexico on a path toward Texas, prompting mandatory evacuation orders for much of the Texas coast. But its path may mean New Orleans experiences only rain and wind. Even so, the city continues its evacuation. 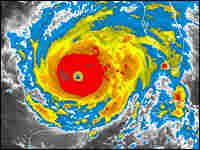 A satellite image of Hurricane Rita in the Gulf of Mexico at 9:45 p.m. EDT Wednesday. NOAA hide caption

As Hurricane Rita gained strength today in the Gulf of Mexico, people along the Texas coast moved inland. Rita is now a Category 5 storm, its top winds around 165 miles an hour. There are mandatory evacuation orders today for all of Galveston and sections of Houston and Corpus Christi. To the east, people in New Orleans are hoping predictions that Rita will steer away from Louisiana are correct. The military commander there, Army Lieutenant General Russell Honore, says the city may experience only wind and rain. Even so, New Orleans continued its own evacuations today. NPR's Robert Smith has more.

As the sun rose this morning over the Mississippi, the symbol of the federal presence in New Orleans, the USS Iwo Jima, hightailed it out of town. A flotilla of tugs guided the aircraft carrier out to sea as General Honore sat on shore and defended the pullback.

Lieutenant General RUSSELL HONORE (US Army): Between here and the mouth of the Mississippi, there's about an eight-hour trek. We try to eliminate any possibility of them getting trapped inside the Mississippi River.

SMITH: Military officials say that the movement of troops and equipment out of New Orleans is not a retreat or even a pullout, but a repositioning. The Coast Guard and National Guard wants its search-and-rescue teams ready in the interior of Louisiana to respond wherever Rita hits. Homeland Security Secretary Michael Chertoff, speaking on CNN, said the response to Rita will not be anything like Katrina.

Secretary MICHAEL CHERTOFF (Department of Homeland Security): Because we anticipated at least the possibility of a second storm coming. We've now prepositioned, or are in the process of prepositioning, a lot of supplies. We've got helicopters on standby. And so we are taking it very seriously, and we are leaning as far forward as we can in preparation.

SMITH: A spokesperson for the National Guard says that in the long term, the force level in New Orleans will remain the same, but it was strangely quiet this morning in the mess tent for military personnel. Eddie Boy Warner(ph), the cook here, says a lot of military presence has already tapered off.

Mr. EDDIE BOY WARNER (Cook): It started tapering off yesterday afternoon. People started scrambling. We went from 6,000 to 600. So for us, it looked like, `What happened?'

SMITH: Warner says he, too, may be gone tomorrow.

SMITH: Even though Rita is trekking toward Texas and not Louisiana, officials in New Orleans are still concerned about the flooding that could happen with even a few inches of rain. The fixes for the levees of the city are temporary, with gravel berms in some places only a few feet above the water. It was this reality, and not just the possibility of a direct hit by Rita, that prompted Mayor Ray Nagin to issue a mandatory evacuation order for the few residents left in New Orleans. Last night, Governor Kathleen Blanco once again declared a state of emergency for the state's Gulf Coast.

At the infamous convention center, the scene of chaos after Katrina, the military has brought in buses and National Guard troops, offering immediate rides for anyone who wants to leave. This morning, there were eight buses with only one rider. Major Arnold Strong, a spokesperson for the Guard, says this time, no one will be overlooked.

Major ARNOLD STRONG (National Guard Spokesperson): We're still finding some people. We're tracking, I believe, it's 62 people that are in our entire area of operations that refuse to go, refuse to be evacuated, refuse to go anywhere. We know exactly where they're at in case this hurricane hits hard.

SMITH: So far the response to the orders of evacuation seems lukewarm, but that may change if Rita takes another course. At this time, no one can say they weren't warned or offered help to get out of the city. Robert Smith, NPR News, New Orleans.