Accessibility links
Revisiting Katrina-Ravaged Plaquemines Plaquemines Parish was one of the worst-affected areas in and around New Orleans. Thousands of people lost their homes and are desperately trying to cope with the storm's aftermath. Also, an oil pipeline has broken open, spilling some of its contents into a fragile wilderness.

Plaquemines Parish was one of the worst-affected areas in and around New Orleans. Thousands of people lost their homes and are desperately trying to cope with the storm's aftermath. Also, an oil pipeline has broken open, spilling some of its contents into a fragile wilderness. 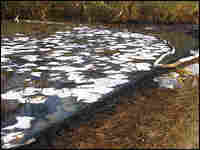 A broken pipeline spilled 136,000 gallons into a marsh in Plaquemines Parish, south of New Orleans. The white objects seen in the photo are used by cleanup crews to soak up the oil. Anne Hawke, NPR hide caption 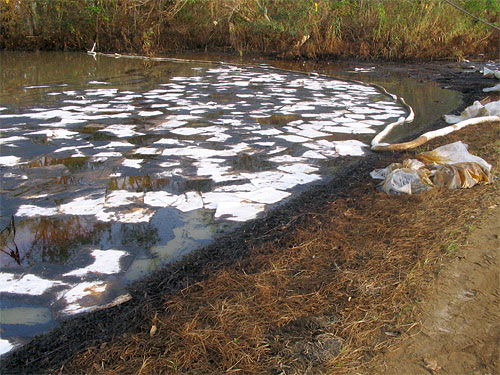 A broken pipeline spilled 136,000 gallons into a marsh in Plaquemines Parish, south of New Orleans. The white objects seen in the photo are used by cleanup crews to soak up the oil. 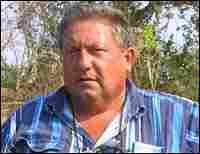 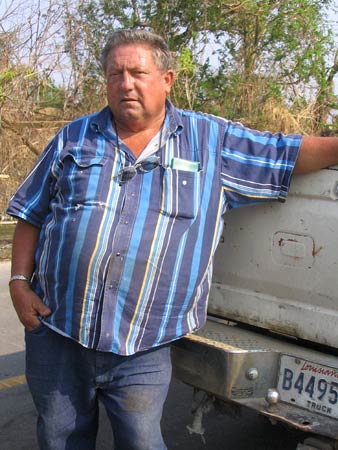 Phillip Simmons, a retired boat captain, saw the entire neighborhood where his family has lived for four generations wiped out by Hurricane Katrina.

Hurricane Katrina caused so many oil spills along the southeast Louisiana coast the US Coast Guard says they can't count them all. NPR's John Burnett reports that the spills range from a couple of barrels overturned at a loading dock to 90,000 barrels gushing out of huge oil storage tanks.

To give you an idea of the gargantuan force of Katrina's storm surge, it floated a two-million-gallon oil storage tank off its foundation beside the Mississippi and dropped it several hundred feet away. Up and down both sides of the river, the storm ruptured tanks and pipelines that dumped just over eight million barrels of crude according the US Coast Guard pollution response task force.

Today, three weeks after the storm, more than half of that has evaporated or it's been cleaned up by more than 600 oil spill contractors. Charlie Hebert, a Louisiana native who works with the US Fish and Wildlife Service, is optimistic based on what he saw during a recent overflight of the spill zones. Hebert says he did not see huge oil slicks, but instead isolated pockets of oil sheen on the wetlands.

Mr. CHARLIE HEBERT (US Fish and Wildlife Service): Most of the time, we see the marsh, although it looks really bad, that will revegetate next spring with almost no sign of the oil having been there. And that's typically what we see here almost every spill. You don't see the long-term effects. It won't be years before that restores itself.

BURNETT: On the ground, the picture is more troubling.

BURNETT: That's an on-site description from Steve Robertson, also with the US Fish and Wildlife Service. He made his way down Highway 23 into Plaquemines Parish, south of New Orleans, to one of the bigger spills. The storm rammed a piece of corrugated iron into a 20-inch pipeline owned by Shell Oil; 136,000 gallons seeped into the marsh. Though cleanup crews are sopping and skimming up the oil, about half the leak remains uncontained. Again, Steve Robertson.

Mr. ROBERTSON: You know, most spills we deal with are much more contained in, you know, one or two sites. This is just kind of spread out so broadly and everywhere. The good thing is we haven't found that many birds in here yet; they seem to have been driven out by the storm. But they're starting to come back.

BURNETT: Any other time, people would be more concerned about the fate of the egrets and herons that make their home in this marsh. But as we're stopped on the highway surveying the black goo on the water's surface, a 62-year-old retired boat captain named Philip Simmons pulls up and makes this observation.

Mr. PHILIP SIMMONS (Retired Boat Captain): Well, it's got oil, but I mean, it's a natural disaster, you know. I mean, it's total destruction. I mean, everything. It's not just the oil, it's--you know, nobody has a home from West Pointe a la Hache south. Very, very few of them that's even got anything to start with to rebuild.

BURNETT: Simmons stands in a striped cowboy shirt sweating under the unseasonably hot sun. In the back of his pickup are some batteries for his swamped bulldozers and feed for his surviving cattle; he lost more than 400 head.

Mr. SIMMONS: If you want to follow me down the road about a mile, I'll show you where my sisters live. You won't be able to get to my house 'cause it's still in water.

BURNETT: We follow Philip Simmons to the fishing village of Empire, which no longer exists. It is gone. Wind and water shoved every structure in town off its foundation and tore it apart. All that exists of Empire, Louisiana, is splintered building materials and the waterlogged St. Ann's Catholic Church. It somehow survived with steeple and cross intact. The same cannot be said of the Simmons family compound.

Mr. SIMMONS: That's where my Aunt Beulah Stockford(ph) used to live. She had a big, beautiful home under that oak tree right there. And my other sister's house was right over in here. My dad's house was in the back, and then my house was on the four-lane back there. That's one, two, three, four, five, six...

The oily residue that coats southern Plaquemines Parish certainly compounds the problem of cleanup for returning residents, but that presumes there's anything left to clean up. The little river towns of Empire, Port Sulphur, Buras, Boothville and Venice have been erased from the map. Right now the biggest question for the people who lived there is not whether the marsh will come back, but whether they will. John Burnett, NPR News, New Orleans.