Accessibility links
Following the Monarchs in an Ultralight Airplane Some 300 million monarch butterflies spread all over North America will soon converge on small forests in the mountains of Mexico. This year, the butterflies have unusual company -- Francisco Gutierrez. He plans to follow the monarchs' migration in a 33-foot wide utralight airplane.

Listen
Following the Monarchs in an Ultralight Airplane

Some 300 million monarch butterflies spread all over North America will soon converge on small forests in the mountains of Mexico. This year, the butterflies have unusual company — Francisco Gutierrez. He plans to follow the monarchs' migration in a 33-foot wide utralight airplane. 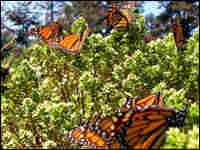 One of the world's most amazing migrations is about to begin in earnest. Three hundred million monarch butterflies spread across North America are about to converge on small forests in the mountains of Mexico. This year the butterflies have unusual company, as NPR's John Nielsen explains.

Francisco Gutierrez(ph) is a man whose life is ruled by two obsessions. First, the monarch butterflies that fly down to Mexico every winter, filling the trees and the forest near Gutierrez's home in the Mexican state of Michoacan. When he was a kid, he used to stare at these trees for hours.

Mr. FRANCISCO GUTIERREZ (Monarch Researcher): It's amazing. Sometimes the branches of the trees brokes because the weight of so many...

Mr. GUTIERREZ: Yeah, brokes. They--you can have in one tree 1 million of monarchs. Imagine that.

NIELSEN: Obsession number two, not coincidentally, is a 33-foot-wide ultra-light airplane with wings painted to look exactly like the wings of a giant monarch butterfly.

(Soundbite of motorized glider being started)

NIELSEN: Recently, Gutierrez and his motorized glider took off from a runway in Canada and turned to the South. As millions of monarchs converge on Mexico several weeks from now, Gutierrez plans to glide in right behind them filming everything. Eventually he plans to produce a documentary that captures this migration from what you might call the monarch's eye point of view. Like the butterflies, he plans to make a lot of pit stops along the way, however. Recently, it was an airport in suburban Maryland.

(Soundbite of motorized glider being shut off)

NIELSEN: Gutierrez spent that morning taking curious, but terrified, reporters up in his ultra-light so that they could bounce around on the wind and catch the view from 1,000 feet. After flights like those, it is impossible not to marvel at the skills of an inch-wide insect that flies from Canada to Mexico.

Mr. GUTIERREZ: Five thousand, five hundred kilometers. Imagine. If we compare the size of this insect with us, it's the same as--we have to go to the moon and back. You know that?

NIELSEN: The moon and back?

NIELSEN: Gutierrez had been warned not to ever veer towards the protected air space over the nation's capitol. Not to be deterred, he towed his glider into the city and parked it on a baseball field. There he was met by Lincoln Brower, a monarch expert at Sweet Briar College in Virginia. Brower called the glider trip a stunt that could help answer some important scientific questions. For instance...

Mr. LINCOLN BROWER (Monarch Expert, Sweet Briar College): Nobody has any real idea how far monarchs fly above the ground. Are there thousands of them as you get up in the air a ways? And how high do they fly?

NIELSEN: While Gutierrez taxied back and forth across the ball field, Brower talked about the urgent need to draw attention to the threats to this migration. In the United States, he says, herbicide use is wiping out the weeds these insects need to eat. Meanwhile, down in Mexico, illegal logging is rampant, even in protected forests. Brower was in those forests last winter.

Mr. BROWER: You could hear chain saws in the distance and you could see piles of sawdust and piles of chipped wood where they were logging.

NIELSEN: As Brower talked, an actual monarch butterfly flitted across the baseball field, a sign that the migration had begun. Gutierrez has now flown west out of suburban Maryland. When he reaches Kansas, he will veer to the left and head for Mexico. John Nielsen, NPR News, Washington.

INSKEEP: If you don't have time to make the trip yourself, you can find photos of monarch butterflies and of the ultra-light airplane Francisco Gutierrez is using to follow their migration by going to our Web site, npr.org.