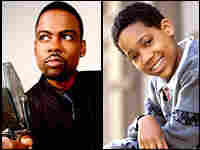 Chris Rock is best known as a stand-up comedian, but now he's taking his streetwise sense of humor to the situation comedy format as executive producer and narrator of UPN's "Everybody Hates Chris." Here is DAY TO DAY television Andrew Wallenstein with this review.

There's something delightfully perverse about someone like Chris Rock attempting a sitcom. Injecting his abrasive but brilliant comedic style into television's cuddliest genre is kind of like a graffiti artist trying his hand at a watercolor. But that's exactly why "Everybody Hates Chris" has such amazing potential. Sitcoms have grown so stale in recent years precisely because they tend toward the cute and cloying. Rock goes in the opposite direction, even with his choice of title, giving the Emmy-winning sitcom "Everybody Loves Raymond" a sharp twist.

"Everybody Hates Chris" is based on recollections of growing up in the Bedford-Stuyvesant section of Brooklyn in the 1980s. Rock isn't actually in the show. He hands over his persona to 12-year-old actor Tyler James Williams, but Rock is featured as the narrator, as in this scene in which his pint-sized self confronts a junior high school bully.

(Soundbite of "Everybody Hates Chris")

Mr. CHRIS ROCK: My mother thought going to a white school meant I would get a better education and I would be safe. Wrong!

Mr. ROCK: That's Joey Caruso, a little thug with a big chip on his shoulder. You know, I managed to avoid him before I wore these shoes.

WALLENSTEIN: As you can tell, Rock keeps to the territory he knows best by refusing to glide over the issue of race. It permeates every minute of the show. It's an unusual choice that other black family sitcoms like "The Cosby Show" and "My Wife and Kids" didn't make, but it works. And yet the real strength of "Everybody Hates Chris" is what, at the end of the day, makes or breaks a sitcom: the cast. And it's the parents that really steal the show here. Terry Crews plays Chris' father, an ill-tempered tightwad. This is a kind of guy who tells his son to unplug his own clock while he's sleeping to save money. But the real standout is Tichina Arnold. You might remember her as the foil to Martin Lawrence on his own FOX sitcom in the 1990s. She plays Chris' mom with a fiery charm.

(Soundbite of "Everybody Hates Chris")

Ms. TICHINA ARNOLD: (As Rochelle Rock) If I ever catch any of you-all spray painting on anybody's wall, I'm going to put my foot so far up your behind you'll have toes for teeth. Get inside.

Mr. ROCK: That's my mother, Rochelle. She had a hundred recipes for whoopin' (censored).

Ms. ARNOLD: (As Rochelle Rock) Boy, I will slap the caps off your knees. I will knock you into last night. I will slap your name out the phone book and call Ma Bell and tell her I did it.

WALLENSTEIN: Now that's the kind of comedy Emmy voters will probably remember next year. Root for this show to catch on, but let's be realistic. UPN has scheduled it Thursdays at 8 PM, one of the most competitive time slots on the schedule. I'll say I'm cautiously optimistic for "Everybody Hates Chris." In the pitiful world of sitcoms, there may be no higher praise.

ADAMS: Andrew Wallenstein is an editor for the Hollywood Reporter and TV critic for DAY TO DAY.

DAY TO DAY returns in a moment. I'm Noah Adams.