Listen
'A History of Violence': A Ticking Timebomb 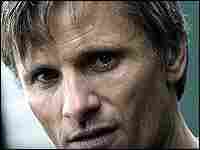 Viggo Mortenson stars, along with Maria Bello and Ed Harris, in A History of Violence. New Line hide caption

"A History of Violence" is a ticking time bomb of a movie. It's a gripping, casually subversive piece of work that marries pulp watchability with larger concerns without skipping a beat. It's also a tightly controlled film about an out-of-control situation: the prevalence of violence in America and how that impacts both individuals and the culture as a whole. "Violence" stars Viggo Mortensen and Maria Bello as a happily married couple living the American Dream with their two children in the Midwest. An act of pure heroism on his part sets the plot in motion, but this non-traditional film never lets us forget that it is also a violent act and, as such, has an explosive effect on everyone's life.

(Soundbite of "A History of Violence")

HOLMES: (As Jack Stall) I am worried. Oh, you're sweating. You're soaked, Dad. What kind of false alarm?

TURAN: "Violence" is directed by David Cronenberg, whose films usually play out on the farthest shores of reality. Though he's on his best behavior here, Cronenberg can't help but add his own provocative, off-kilter tone to the material. Adding those qualities to an apparently straightforward story disturbs us in ways that more fantastical tales rarely can. Cronenberg never goes overboard in his depiction of violence, a la Quentin Tarantino. What his film is about is the pernicious, corrosive effects of violence. The way it's tainted is as hard to rub off as blood is to wash out. Each act of mayhem in the film, no matter how justified, simply begets another one. It starts to seem axiomatic that once you let violence into your life, it will never leave you alone.

Helping to seamlessly blend the film's philosophical concerns with its dead-on plot is its excellent acting. Mortensen and Bello are terrific as a severely challenged husband and wife, and Ed Harris is a picture of controlled bitter menace, as someone who claims he knew the hero in an earlier life.

(Soundbite of "A History of Violence")

Ms. MARIA BELLO: (As Edie Stall) I know that my husband is Tom Stall. That's what I know.

Mr. HARRIS: (As Carl Fogaty) Why don't you ask Tom about his older brother Richie.

Mr. HARRIS: Ask Tom about how he tried to rip my eye out with barb wire. And ask him, Edie, how come he's so good at killing people.

TURAN: "A History of Violence" finally belongs to the man who held the entire equation of the film in his head, David Cronenberg. `This film has such a transparency,' the director said at its Cannes debut, `that you can see through it into something else that is underneath,' and that something else is quite disturbing. Quite disturbing, indeed.

INSKEEP: That's Kenneth Turan, a film critic for MORNING EDITION and for the Los Angeles Times.