Accessibility links
Hurricane Waters Pour into Parts of New Orleans Rain and storm surge from Hurricane Rita have sent water over and through breaches in patched levees around New Orleans. The lower Ninth Ward, which was completely flooded by Hurricane Katrina, is once again under water.

Rain and storm surge from Hurricane Rita have sent water over and through breaches in patched levees around New Orleans. The lower Ninth Ward, which was completely flooded by Hurricane Katrina, is once again under water. 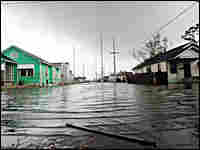 Water pours down a Ninth Ward street after waters from Hurricane Rita topped a section of the levee along the Industrial Canal that had given way during Hurricane Katrina in New Orleans, Sept. 23. Reuters hide caption

The outer arms of Hurricane Rita are now over coastal Texas and Louisiana. The eye is expected to make landfall near the Texas-Louisiana border early tomorrow. Rain and high winds are already hitting that area. Texas Governor Rick Perry said state and local authorities are ready to provide help as soon as the storm passes.

Governor RICK PERRY (Texas): We are pre-positioning search and rescue personnel, doing the same for mass care strike teams. And we will have a strong law enforcement presence in the aftermath of this storm in the areas that are impacted.

NORRIS: In New Orleans, an early storm surge from Hurricane Rita caused water to pour over the levee protecting the neighborhood known as the Lower Ninth Ward. The Army Corps of Engineers had built a temporary gravel berm in a spot where Hurricane Katrina had breached the levee. That neighborhood was devastated by the last flood; officials said they thought no one was still in the homes. NPR's Robert Smith traveled out to the Industrial Canal as the water rose.

So I'm climbing up the ladder on the west side of the Industrial Canal. We're trying to get a view of where the levee's overtopped without actually going in. So standing here on top of the seawall, you can see where the temporary levee is, it still is, it's just that the water's gone too high. The temporary levee's still about six, seven feet below where the seawall is supposed to be. And apparently the water is just pouring over into the Lower Ninth Ward.

SMITH: On top of the flood wall with me is Keith Allen. You're from what station?

SMITH: So you're from New Orleans. Does this happen often, it's this high?

Ms. SUE EAGEN(ph) (New Orleans Levee District): This didn't happen---this happened when I was 12 years old, and that was 40 years ago.

SMITH: I'm sorry. What's your name? Where are you from?

SMITH: This was nowhere near this high yesterday.

Ms. EAGEN: This is all tidal surge.

Ms. EAGEN: This is all tidal surge coming in from...

Mr. ALLEN: Wind out of the east.

Ms. EAGEN: This is coming in from the Gulf, Mississippi River Gulf outlet and the Intracoastal Waterway.

SMITH: To get a better view, I've come up over here on the Claiborne Avenue Bridge. And from here, you can actually see the breach. It looks like, you know, class 5 whitewater going over the breach and into the Lower Ninth Ward. And the water just goes, oh, I don't know, block after block after block. You know, it's hard to see how high because the houses there were mostly destroyed. But I talked to someone from the Oklahoma National Guard who was over there, and he said it was at least four or five feet deep of water. Also up here, we ran into Brigadier General Miles Deering.

Brigadier General MILES DEERING: One thing I've learned is you can't do anything about Mother Nature. You just have to let her take its course. And when you've got something like this, we just have to address it, and we have to ensure that all people we can get to safety are at safety. And my concern right now is the soldiers, and we've got a plan to and are in the process of evacuating soldiers on the outside. So like I say, I'm getting the view you are right now. I just walked up and encountered this, so...

SMITH: These severe winds are causing problems in other neighborhoods, too. I'm on a highway overpass that goes into the neighborhood of Bywater, and this highway overpass that goes over the Industrial Canal here was clear. It was clear two days ago, and now it dead-ends into a huge lake of water, a lake that covers, I don't, five, six, seven, eight blocks with houses on them which are now officially reflooded. I can see the water lapping at the doorways. And the wind is just blowing this water into the houses.

The Fire Department was here, checking out the situation, and I ran into a New York Fire Department official. His name is Tim Collins. He's from Flatbush. And he told me what he saw.

SMITH: Is it the same areas that have been flooded before?

Mr. COLLINS: Yeah, they've been flooded before. You can see the waterlines on the houses.

SMITH: How deep is it? How close is it to the high-water mark?

Mr. COLLINS: Right now, it's a couple feet, but it's going to get higher. It's getting higher as we speak, so...

SMITH: Robert Smith, NPR News, on the edge of the Industrial Canal in New Orleans.