Accessibility links
Flood Imperils Work of Famed Jazz Photographer Herman Leonard's images made a visual record of jazz artists stretching from Louis Armstrong to Miles Davis. He awaits a look at his ruined New Orleans studio to see what became of his work. 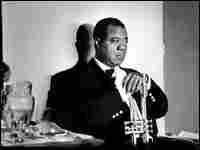 Louis Armstrong, caught in a reflective moment, cast a giant shadow on the world of jazz... and so does Herman Leonard's photography. Herman Leonard hide caption 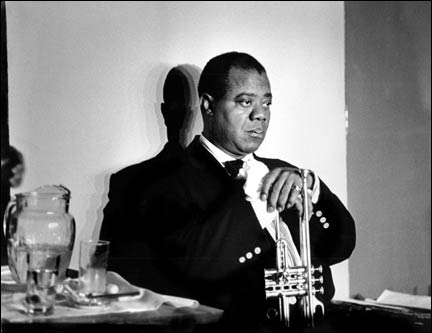 Louis Armstrong, caught in a reflective moment, cast a giant shadow on the world of jazz... and so does Herman Leonard's photography.

Herman Leonard has been called the Charlie Parker of photography. His dramatic black and white images of jazz greats such as Dizzy Gillespie, Thelonious Monk -- and Parker himself -- helped create a visual record of one of the most fertile periods of jazz. A great deal of that record may have been lost or damaged in the floods that followed Hurricane Katrina. 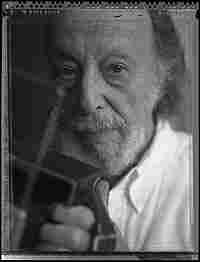 Herman Leonard has been behind the camera since he was a student at Ohio University in 1940. Greg Miles hide caption

On Aug. 27, as the storm approached New Orleans, the 82-year-old Leonard, his manager and a small group of friends scrambled to save as many of his photos as they could, hustling them to the third floor of his home. The negatives are in a museum vault that Leonard says remains above the flood waters... though it likely lost all climate control.

But he's heard the studio and darkroom on the first floor of his house were submerged under eight feet of water.

His daughter and her family had recently moved to New Orleans to be closer to him. They lost nearly everything to the hurricane and flood.

Now Leonard and family wait in Los Angeles for the chance to return and find out what's left.

The Smithsonian has more than 130 Herman Leonard photographs in its permanent collection, spanning a career that began when he was a photography student at Ohio University in 1940. Leonard eventually found work as a portrait photographer in New York. To blow off artistic steam, he would hang out at jazz clubs along 52nd Street and take pictures.

Leonard is putting a brave face on his situation. "That's all right," he says. "It gives me incentive to get back in the darkroom and start printing again."

The Eye of Jazz