The multi-talented Mike Mills has long worked on cool, edgy projects that mix art and commerce, from the Beastie Boys to the Gap.

Now Mills, who works as a graphic designer and directs documentaries and music videos, is making his feature film debut with Thumbsucker. The film, based on a novel by Walter Kirn, stars Vincent D'Onofrio, Tilda Swinton and Vince Vaughn. It had its debut at the 2005 Sundance Film Festival. 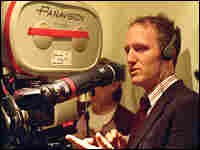 Mike Mills has turned his many interests -- and talents -- into a varied career in video and design. Sony Pictures hide caption

Mills has made several short documentaries -- on subjects from love to skateboarding -- as well as commercials for Levi's, the Gap, Volkswagen, MasterCard and Nike. He has brought his unique style to music videos for Moby, Yoko Ono and the band Everything but the Girl. In addition, he has created graphics for the clothing label X-Girl and the bands Sonic Youth and the Beastie Boys.

A prolific designer and filmmaker, Mike Mills has several projects on the Web: