Accessibility links
Copters, Boats Rescue Survivors in Vermilion Boats and helicopters are being used to search for people stranded by floodwaters in southwestern Louisiana. Sunday in low-lying areas of Vermilion Parish, less than 100 miles from the Texas border, rescue workers are hoping to remove the last of those who stayed behind. Beth Fertig of member station KRVS reports.

Boats and helicopters are being used to search for people stranded by floodwaters in southwestern Louisiana. Sunday in low-lying areas of Vermilion Parish, less than 100 miles from the Texas border, rescue workers are hoping to remove the last of those who stayed behind. Beth Fertig of member station KRVS reports. 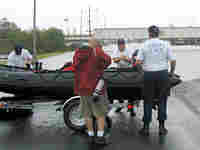 Rescue crews were working to help survivors even as the storm was coming ashore Saturday. Amy Walters, NPR hide caption

Boats and helicopters are going out to search for anyone stranded by floodwaters in southwestern Louisiana. In low-lying areas of Vermillion Parish, rescue workers are hoping to reach the last of those who stayed behind despite evacuation orders. Beth Fertig of member station KRVS reports.

The town of Abbeville has become a staging area for search and rescue missions into the bayous. This morning National Guard troops and state and local officials were looking at maps of Vermillion Parish and surrounding regions, where they've gotten reports of people stranded by floodwaters.

Unidentified Man #1: That's a dead end back there?

Unidentified Man #2: 688, yeah, because this woman's definitely staying--is what they're saying, and...

FERTIG: About 150 people were plucked out of houses and rooftops yesterday by boats. But the rescue operation was forced to stop because of strong winds and choppy waters. Captain Jubal Marceau(ph) of the Louisiana Department of Wildlife and Fisheries says there's no way to know how many people are still out there because phones aren't working.

Captain JUBAL MARCEAU (Louisiana Department of Wildlife and Fisheries): We're going to try to do a door-to-door effort, knock on doors and try to cover as many homes...

FERTIG: The areas that were flooded are low-lying marshlands in Louisiana Cajun country on the edge of the Gulf Coast. Water levels are now receding, but tidal surges early Saturday caused the water to rise more than 10 feet in some places. Forty-eight-year-old Barbara Broussard(ph) was rescued this morning from her house south of Abbeville. She says she and her son rode out the hurricane because he thought it wouldn't be so bad, but that all changed once the waters rose.

Ms. BARBARA BROUSSARD: Oh, my God, I went out on my porch, I was sitting out on my porch looking around, and I saw two men coming in a boat. And so I ran out and I asked the men--I said, `Can anybody get through here at all on either end of the street?' And they said--on the other end, they said definitely not; the water would be--is above our heads.

FERTIG: Mike and Helen Caffrey(ph) found themselves in the same position yesterday when they were rescued off their rooftop by a man in a boat. They woke up to find water surrounding their house.

Mr. MIKE CAFFREY: It went over the top of our car. We couldn't even get the car.

Mrs. HELEN CAFFREY: And it was in the trailer and everything. We lost everything. Only thing we got out was him and me, the clothes we got on and our dogs.

FERTIG: The Caffreys said they stayed because they have nowhere else to go. The areas that were hard hit include farming and shrimping communities. Vermillion Parish is home to 50,000 people. Sheriff Mike Couvillion says up to 30 percent of the homes there might have been destroyed.

FERTIG: Those who don't have family members to stay with are being taken to shelters, and a few were taken to hospitals. Officials say it could be days before the waters fully recede. For NPR News, I'm Beth Fertig in Lafayette, Louisiana.