Accessibility links
Oil Markets Exhale as Rita Passes By Oil prices fell on world markets Sunday as traders expressed relief that Hurricane Rita spared most of the refineries along the Texas Gulf Coast. 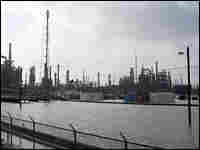 Despite flooding at the Valero refinery in Port Arthur, most of the oil-industry infrastructure in the area suffered only minimal damage. Amy Walters, NPR hide caption

Hurricane Rita damaged three oil refineries in Lousiana and Texas when it stormed ashore with winds topping 120 mph and more than a foot of rainwater. But most rigs, pipelines and refineries appear to have been spared.

As a result, oil industry officials were breathing a sigh of relief Sunday. Oil prices fell on world markets Sunday as traders reacted to news that Rita spared most of the refineries along the Texas Gulf Coast.