Listen
Don Adams, Missed by THAT Much and So Many 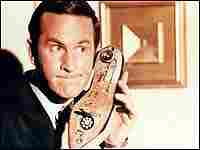 Don Adams as Maxwell Smart, with the shoe phone, one of an assortment of gag props that lampooned James Bond's fabulous arsenal. hide caption

Don Adams, also known as Agent 86, on the 1960s TV series Get Smart, has died at age 82. Adams played Maxwell Smart, the agent who puzzled villains and his boss with his confusing explanations and farcical combat style.

The role of the clueless secret agent, bolstered by the comic writing talents of Mel Brooks and Buck Henry, won Adams three Emmy awards. Two later attempts to revive the show proved unsuccessful, but the original run left TV fans of a certain age with a store of catch phrases. Remember these?

After causing yet another disaster for the Chief, Max would deliver a self-abashed and entirely inadequate apology. The Chief of the faux CIA outfit CONTROL was played by Edward Platt, who died in 1974.

Max: (Used when his enemies call his bluffs and he ineffectually resorts to more desperate ones) "Would you believe..."

This catch phrase was picked up by Johnny Carson for use in his Tonight Show monologue. It actually predates Get Smart!, having been created for a comedy act developed by Adams and his friend Bill Dana (a.k.a. Jose Jimenez).

Here's one example of how it played out, from the comedy act:

Faversham: You think you've got me, but I have you surrounded by the entire mounted 17th Bengal Lancers.

Khan: I don't believe you.

Faversham: Would you believe the First Bengal Lancers?

Faversham: How about Gunga Din on a donkey?

Missed It By THAT Much

When Max uttered the line "Missed it by that much," holding up thumb and forefinger to demonstrate, he was invariably describing some hopelessly misguided attempt to pull off a spectacular super spy move.

I ASKED You Not to Tell Me That

Max: "Don't tell me [he made yet another mistake and when his compatriot confirms it, he responds...] I asked you not to tell me that."

Used by the ever-so-knowing Maxwell Smart to dismiss another in a series of highly unlikely developments. One example: "The old Professor Peter Peckinpah all purpose anti-personnel Peckinpah pocket pistol under the toupee trick."

"That's The Second Biggest (Whatever) I've ever seen."

99 was of course the lovely Barbara Feldon, Maxwell Smart's love interest and a far superior -- though always supportive -- spy. Max maintained the pretense that 99 was learning deduction and logic from him, but the expression on his face showed that he was many steps behind her.

Would You Believe, a Get Smart! Site
Don Adams on WikiPedia