Accessibility links
The Shad Are Running The forsythia is blooming, and that, fishermen say, means just one thing: The shad are in the river — and at the market. Bonny Wolf loves the fish, but she's just wild about the roe. She shares her favorite ways to prepare the seasonal delicacy.

The Shad Are Running

The Shad Are Running 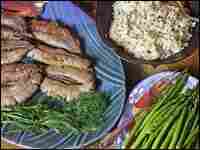 Get recipes for Simple Shad Roe, Shad Stuffed with Its Roe and Wild Leeks and Lemon Rice. 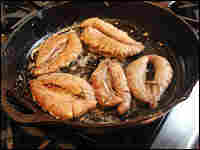 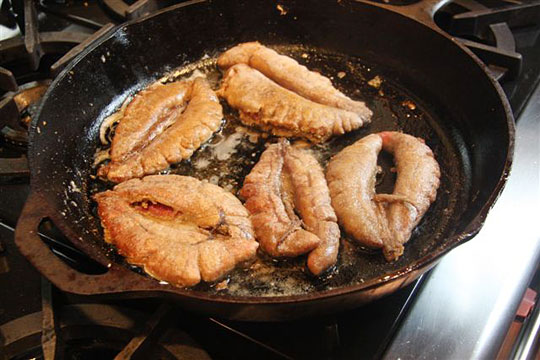 The hardest part of preparing Wolf's simple shad roe is careful handling of the delicate sacs.

You know winter is ending when the shad start their run from the ocean to freshwater rivers. They are — here's a new vocabulary word — anadromous, which means that when it's time for them to spawn, they return to the fresh water where they were born.

While I love the fish, I'm wild about the roe. I am not alone. All up and down the Mid-Atlantic Coast where the largest shad runs are, shad fanciers will be euphoric until around Mother's Day when it suddenly disappears.

I grew up in the Midwest nowhere near shad and was introduced when I moved to Washington, D.C., where the late-winter delicacy is well known. Like many converts, I'm quite passionate in my devotion. My fish seller says when the shad roe comes in, he has customers who buy it every week for its short season.

To some, the appearance of raw shad roe can be off-putting. The roe comes in sets of two connected sacs — filled with hundreds of thousands of teeny eggs. The color of the sacs varies from tan to deep red, depending on the fish's diet. The veins are clearly visible through the translucent skin of the sac. As you learn to love it, shad roe becomes a beautiful thing.

In the South, shad and its roe are commonly served for breakfast. The late Edna Lewis, the dean of Southern cooks, grew up in a Virginia piedmont farming community. In her bookThe Taste of Country Cooking (Alfred A. Knopf 1990), she writes that her family ate shad and its roe for breakfast with scrambled eggs, bacon, steamed hominy, new honey, hot coffee and a little dandelion wine.

"It was," she wrote, "truly a meal to celebrate the coming of spring."

Shad roe is commonly cooked with bacon and served with grits for breakfast. While I make it as a dinner dish, I often top the roe with tiny fried quail eggs. Traditionally, people pair shad roe with bacon and eggs, although I find that the bacon flavor overwhelms the delicate taste of the roe.

Shad has an important place in American history as well as on the American table. For example, shad saved George Washington's army from starvation at Valley Forge. The hungry troops were saved by a big shad run in the spring of 1778 on the Schuylkill River.

The Civil War Battle of Five Forks might have turned out differently but for the shad run on April 1, 1865. Confederate Gen. George Pickett had orders to hold Five Forks at all costs. But Picket and Fitzhugh Lee, the cavalry commander, were invited to a shad bake and left their underlings to fight Gen. Phil Sheridan's Union troops. By the time the generals got back from the shad bake three hours later, the Confederacy had lost a big battle.

American Indians taught the early English settlers to cook shad by nailing it to cedar planks and cooking it slowly over an open fire. In the course of cooking, the trillions of tiny shad bones dissolve. Shad are so bony, the Indians called them porcupine fish. Fortunately, boned shad are available.

Shad is a sweet, tasty fish. The Latin name is sapidissima, meaning "most delicious." I just put a little salt, pepper and lemon juice on shad filets and run them under the broiler for a few minutes.

I make shad roe simply, too, dredged in seasoned flour and sauteed in butter and olive oil. Both the shad and its roe are so good and have such a fresh taste, they shouldn't be overpowered by other flavors.

Every year when the first shad roe appears in the market, I make the same dinner: shad roe, lemon rice and tiny asparagus with browned butter. I put a few forsythia branches on the table, and no matter what the calendar says, at my house it's spring. 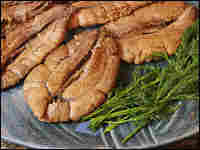 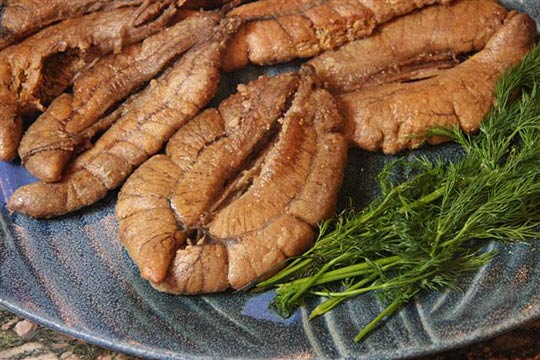 The hardest part of this very simple preparation is careful handling of the delicate sacs of roe. Gently place them in hot fat so they're not punctured, and cook the eggs at a heat (at least medium) so they don't pop and spray all over you and the kitchen. You can cover the pan toward the end if it helps. I usually serve this shad roe with anchovy butter — softened butter mixed with anchovy paste to taste. Just slather a little on the hot roe and then be sure to lick the plate.

1 cup flour, seasoned to taste with salt and pepper

Heat the butter and olive oil in a large heavy frying pan (I use cast iron) until butter begins to bubble.

Dredge the roe through the seasoned flour mixture and lay gently in the hot fat. Keep heat at medium and cook each set 3 to 5 minutes per side, depending on the size of the set. When done, the sac will be firm to the touch and slightly browned. The roe should be pink in the middle. Don't overcook.

Shad Stuffed with Its Roe and Wild Leeks

In her book Uncommon Fruits and Vegetables (Harper and Row 1986), Elizabeth Schneider adapts a smoky, springtime recipe she got from an upper East Side New York caterer. Ramps (wild leeks) have an even shorter season than shad roe. Shad fillets are often butterflied, with 2 "flaps" that make stuffing easy. Or, a large fillet can be cut in half and stuffing laid between the two halves.

1/2 pound wild leeks (ramps) cleaned (see note below); they can be found in specialty stores and farmers' markets (scallions may be substituted)

Cut apart leek leaves and bulbs. Wrap and refrigerate three-quarters of the leaves for another use (such as vinaigrette.) Thinly slice the remaining leaves and bulbs (to yield about 1 1/4 cups.)

Heat 2 tablespoons bacon fat in skillet. Over moderately low heat cook roe, covered, turning once, until nicely browned on both sides — about 6 minutes. Do not cook on high heat or cook through; roe should remain mushy in center when pressed; it should be soft and pink. Cool slightly, remove connective tissue, if necessary. Slice diagonally into medallions about 3/4-inch thick.

Lay 6 pieces kitchen string on buttered broiler pan and place shad on top. Open out the "flaps" (or lay down just one piece of fillet); season lightly with salt and pepper.

Spread half of the leeks, then half of the bacon over center section — but not the flaps. Cover with roe medallions, distributing evenly. Cover with remaining leeks and bacon. Season with salt and pepper.

Fold over flaps (or lay other piece of fillet on top). If using a single fillet, cover gap in center with a long strip of foil folded just to fit. Tie strings to hold fish firmly. Brush top with melted butter. (At this point, fish can be refrigerated. Bring to room temperature — it takes about an hour — before baking.)

Note: Clean ramps by slipping off the first layer of skin from the bulbs, then trimming off the roots. Remove any yellowing or wilted leaves, then rinse in several changes of water, swishing them about vigorously.

Heat broth, salt and garlic in heavy saucepan to boiling. Stir in the rice, cover and simmer until the liquid is absorbed, about 20 minutes.

Remove from heat. Stir in lemon zest and let stand covered for 5 minutes.

Remove the garlic. Gently stir in the dill and butter. Season to taste with pepper. Serve immediately.