Accessibility links
New Monk, Coltrane Recording Discovered In November 1957, an unprecedented lineup of jazz artists performed at New York City's famed Carnegie Hall, including Thelonious Monk and John Coltrane. The recordings from that night were once lost, but were rediscovered earlier this year. 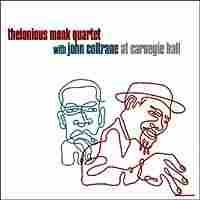 In November 1957, an unprecedented lineup of jazz artists performed at New York City's famed Carnegie Hall. Now those long-lost recordings have been found, revealing a gem of a set with two giants of the jazz world -- Thelonius Monk and John Coltrane.

Tapes made by Voice of America for a later radio broadcast that were located at the Library of Congress in Washington, D.C., only earlier this year.

At the time of their performance that night, both artists were at the height of their powers -- and their best moments in the spotlight were still to come.

Details of the Carnegie Concert at BlueNote.com