Accessibility links
The Mystery of 'Sweet Caroline' and the Sox As a stadium anthem, it's not exactly "Take Me Out to the Ballgame." Susan Orlean visits Boston's Fenway Park to unlock the secret connection between the Red Sox, their loyal fans and singer Neil Diamond's 1969 hit.

Listen
The Mystery of 'Sweet Caroline' and the Sox

As a stadium anthem, it's not exactly "Take Me Out to the Ballgame." Susan Orlean visits Boston's Fenway Park to unlock the secret connection between the Red Sox, their loyal fans and singer Neil Diamond's 1969 hit. 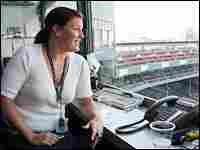 Major-league baseball's regular season ends this weekend. The New York Yankees and the Boston Red Sox play three games, beginning tonight, to decide who's division champ. The games are at Boston's Fenway Park. That's where commentator Susan Orlean found one tradition that got her wondering.

Life is full of mysteries. I've been living in Boston for two years, and I've come across many of those mysteries here. For instance, why do people in Boston boil their meat? Why are they so fond of whale embroidery on their pants? And then there's the singing in the middle of the eighth inning at Fenway Park.

ORLEAN: Of course, every baseball game includes singing: the national anthem, "Take Me Out to the Ball Game." But at Fenway Park, the mystery isn't the singing. It's the song.

Mr. NEIL DIAMOND: (Singing) Where it began, I can't begin to know it...

ORLEAN: "Sweet Caroline" by Neil Diamond, mid-tempo, middlebrow, middle-aged, and yet, it's the sing-along anthem of Fenway Park for reasons to be named later.

ORLEAN: Everyone at Fenway has a theory or a theory about the lack of theories about why "Sweet Caroline" is sung here at every single game. Take Bob Dakoto(ph), a retired teacher who now gives tours at Fenway.

Mr. BOB DAKOTO (Tour Guide): It does strike me as odd, and I'm a--really, a researcher. I research everything. And I just know President Kennedy's daughter Caroline, OK, is from Massachusetts, but I have no idea, OK, at all, all right, where the connection is, why the eighth inning and what have you. Do you know?

ORLEAN: Well, no, I didn't. So I went to find out. I started with Megan Kaiser, who programs the music at Fenway.

Ms. MEGAN KAISER (Music Programmer): There was a fellow who works in this department before I came who had a daughter named Caroline, and when she was born, they played it as kind of a celebratory anthem to this new little girl.

ORLEAN: Like I said, everyone has a theory. This is Megan's third season with the team. By the time she started, "Sweet Caroline" was already a tradition, but it was Megan who took it to the next level.

Ms. KAISER: My first year, I played it almost every game, but not every game. It hadn't yet become the "Sweet Caroline" that it is today.

Ms. KAISER: And since that time, I've gotten to the point where I started choking down the sound at two different parts in the song so you could hear the fans singing. Want to hear it?

Ms. KAISER: And this is your part, ready?

Ms. KAISER: So really, any idiot can sing the--there it is, yeah.

ORLEAN: Ouch. I did wonder whether any of the Red Sox could explain the mystery of "Sweet Caroline." I stopped pitcher David Wells on his way into the dugout or should I say I tried to stop David Wells, who was about to walk right past me until he heard...

Mr. WELLS: Neil Diamond, yeah. Yeah. Of course, who wouldn't like it?

ORLEAN: Does it surprise you that it's a Fenway anthem? I mean, it has nothing to do with Boston really.

ORLEAN: Well, whatever. Of course, Fenway's resident musician, organist Josh Kantor, had his own notions.

Mr. JOSH KANTOR (Organist): It's a silly, cheesy song, but I think it's a fun song when everyone sings along with it.

Hmm. Even the fan I was sitting next to, Michael Cardis(ph), could offer only an existential explanation.

Mr. MICHAEL CARDIS (Fan): It started one time. It felt right, and it continued, and now every time I'm here, it's like clockwork. You know it's going to happen, and it's great. I love it. It's my favorite part of the game.

Unidentified Man #1: I'll play that song even at home when I'm watching the game on TV after a win, yeah.

ORLEAN: Wow, these guys were very serious. By this point, the game was under way. The Red Sox were giving a good spanking to the Kansas City Royals. The crowd was buoyant, and the middle of the eighth was drawing near. Everyone was warming up their vocal chords.

ORLEAN: Beautiful. And yet, I felt unrequited. I still felt the need to clear up the "Sweet Caroline" mystery. And finally, I did. I spoke to a woman named Amy Toobey(ph), who had been the music director before Megan Kaiser. It was Amy who started playing "Sweet Caroline." The reason: She just liked the song. That's it. She just liked the song, and when she played it at Fenway the first time eight years ago, people went crazy.

MONTAGNE: Susan Orlean is a staff writer at The New Yorker Magazine and the author of "The Orchid Thief." Her latest book is "My Kind of Place."