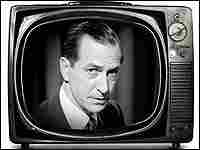 Two of the most distinctive voices from the middle of the last century began echoing around cineplexes this week: broadcaster Edward R. Murrow and writer Truman Capote. Each sounds pretty much as he did in his heyday, but both are imitations. Bob Mondello says that's right in keeping with their moment in history.

Back in the 1950s and '60s, impressionists were everywhere in entertainment. Frank Gorshin was doing Sammy Davis Jr. and Marlon Brando. Vaughn Meader was doing the Kennedys. And Rich Little was doing so many people, he was known as "The Man of a Thousand Voices." One of those voices was Truman Capote's, and when you hear the real Capote speaking, here in a Florida writing symposium in the early 1970s, it's easy to understand why he was ripe for imitation.

Mr. TRUMAN CAPOTE (Writer): I started sending things to various magazines, and one of them was The New Yorker. And suddenly one day I got a note from them asking me if I would be interested in having a permanent job working at The New Yorker.

MONDELLO: In the new movie "Capote," the writer is played by Philip Seymour Hoffman, who may be too tall for the part by more than half a foot, but who pretty much nails the voice.

Mr. PHILIP SEYMOUR HOFFMAN: (As Truman Capote) Jack thinks I'm using Perry, but he also thinks I fell in love with him when I was in Kansas. Now how both of those things can be true is beyond me. It's as if Perry and I grew up in the same house, and one day he stood up and went out the back door while I went out the front.

MONDELLO: Vocal impersonation is not usually a necessary skill for an actor, but in this case, it's an essential one because the original voice was both distinctive and well-known. And if Capote's voice was familiar to the public, it was nowhere nearly as familiar as that of Edward R. Murrow. As a radio correspondent during World War II, Murrow's Battle of Britain rooftop broadcasts held the nation spellbound. And it was that same clipped delivery that made his challenge to Senator Joseph McCarthy in the Communist witch-hunts so effective. Here's the kinescope of the March 9, 1954, broadcast of Murrow's TV program "See It Now."

Mr. EDWARD R. MURROW: No one familiar with the history of his country can deny that congressional committees are useful. It is necessary to investigate before legislating. But the line between investigating and persecuting is a very fine one, and the junior senator from Wisconsin has stepped over it repeatedly.

MONDELLO: In the new movie "Good Night, and Good Luck," actor David Strathairn plays Murrow and had to deliver that speech that way or the moment just wouldn't work. The actor's voice is lighter than Murrow's, thinner and just a tad higher in pitch, but he gets the cadence and the gravitas right. The first voice you'll hear is Murrow's; the second is Strathairn.

Mr. MURROW: We must not confuse dissent with disloyalty. We must remember always that accusation is not proof, and that conviction depends upon evidence and due process of law.

Mr. DAVID STRATHAIRN: (As Edward R. Murrow) ...and that conviction depends upon evidence and due process of law. We will not walk in fear one of another. We will not be driven by fear into an age of unreason if we dig deep in our history and our doctrine. And remember that we are not descended from fearful men.

MONDELLO: There is more to acting, of course, than just capturing a voice. If that's all it took, impressionists would be hired all the time to play famous people. The trick with this kind of impersonation is to make it close enough to what people remember that an audience recognizes it and that they then marvel on the cell phone and around the water cooler about how completely they were taken in by it. But what makes it work when it does, which is not all that often, is that while you're in the theater, the impersonation stops registering. You hear the voice...

MONDELLO: ...and it meshes with the character...

MONDELLO: ...and you forget that it's remarkable at all. I'm Bob Mondello.