Accessibility links
Roman 'Altar of Peace' Survives Aesthetic War An American architect has designed a glass and marble museum that will house the 2,000-year-old Ara Pacis, Rome's "Altar of Peace." It will be the first structure added to the Eternal City's ancient historic center in seven decades. 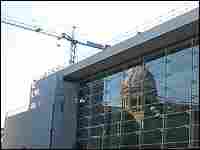 A 17th century Baroque church is reflected in the glass windows of the new museum. Sylvia Poggioli, NPR hide caption 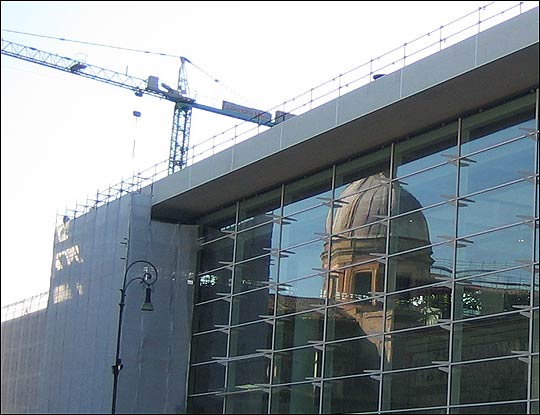 A 17th century Baroque church is reflected in the glass windows of the new museum.

An American architect's design for a glass and marble museum to house the 2,000-year-old Ara Pacis is about to become the first modern structure to rise in Rome's ancient historic center in 70 years.

The project to safeguard the Altar of Peace, erected by the Emperor Augustus in the first century B.C., began 10 years ago. The building around it is crumbling. The altar's carved marble bas-relief sculptures commemorate victories in Gaul and Spain, and are among the great masterpieces of antiquity. It has been at its present site, on the banks of the Tiber River, since 1938, when Mussolini ordered it placed near the emperor's tomb. 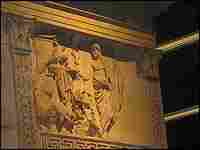 A detail from the Ara Pacis, carved in the first century B.C. to celebrate Roman triumphs in Gaul and Spain. Sylvia Poggioli, NPR hide caption

Construction on Richard Meier's modernist design was delayed many times by interference from bureaucrats and Eternal City art professionals, but it is now scheduled to debut in the spring. The media caught a glimpse on a recent anniversary of Augustus' birthday -- the 2,068th anniversary of that event.

Meier acknowledges the "intimidating" nature of his mission. More protests greeted the museum's unveiling. But he says he hopes he has sustained the "layered history" that defines Rome.

"Safeguarding Rome's ancient legacy does not mean that the contemporary city is unable to produce artistic beauty," says Rome's mayor, Walter Veltroni. "Rome is a city that's growing and doesn't fear what is new."