Accessibility links
'Wallace & Gromit,' Nick Park's Feat of Clay Animator Nick Park is the creative genius behind the new film Wallace & Gromit: The Curse of the Were-Rabbit. It's the feature-film debut for characters beloved in previous short features... a brainy inventor and his flop-eared best friend. 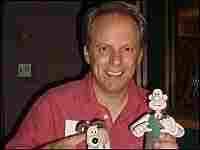 Animator Nick Park holds the stars of his stop-motion film. They look so much bigger on the screen. DreamWorks hide caption

Animator Nick Park is the artistic genius behind the new film Wallace & Gromit: The Curse of the Were-Rabbit.

How Did They Do It?

It's the feature-film debut of Wallace, a brainy British inventor, and his silent best friend, the flop-eared dog Gromit. 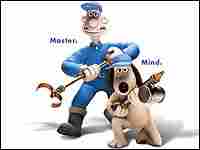 It was no simple thing to make the film. Park didn't rely on the computer graphics that have revolutionized animation. This is stop-motion animation, with clay figures and painstaking, frame-by-frame work. There are 115,000 frames of finished footage in the film, and it took five years to complete.

But unlike Wallace & Gromit, Park and his creative team do have feature-length film experience. They scored a major hit with the 2000 escape-movie spoof Chicken Run.