Accessibility links
Shemekia Copeland, Telling 'The Soul Truth' Blueswoman Shemekia Copeland's voice rings rich with attitude and soul. The singer talks with Debbie Elliott about her new album, The Soul Truth, and why her lyrics tell stories of strong women standing up for themselves.

Blueswoman Shemekia Copeland's voice rings rich with attitude and soul. The singer talks with Debbie Elliott about her new album, The Soul Truth, and why her lyrics tell stories of strong women standing up for themselves.

'Honey Do That Voo-Doo' 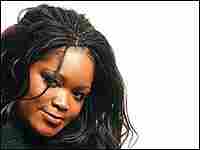 Shemekia Copeland, in a detail from the cover of her latest CD. hide caption

Shemekia Copeland is a woman with a mission. She says so on the first track of her latest CD, "The Soul Truth."

(Soundbite of "Breakin' Out")

Ms. SHEMEKIA COPELAND: (Singing) You better step aside. I'm a woman on a mission. I finally got a plan to get me out of this old prison. You're treating me bad, so I'm making tracks. I'm out of here, taking off. I ain't coming back. No! I'm breaking out.

ELLIOTT: The 20-something blues singer joins us now from Chicago Public Radio.

Ms. COPELAND: Hey. How you doing?

ELLIOTT: I'm great. It was really hard for me to stay in my seat listening to that first track, "Breakin' Out."

Ms. COPELAND: Thank you. Thank you. We had such a good time recording this record.

ELLIOTT: Tell me what that song is about.

Ms. COPELAND: It's about a lot of things, you know. I think that ever since I started doing this, I like to put women in a position of power, you know. There's so many insecure women out there, and I just want women to know be proud of who you are and what you are. And, you know, anything that's going wrong in your life that you want to change, you can change it and move on.

(Soundbite of "Breakin' Out")

Ms. COPELAND: (Singing) Honey, I'm breaking out. Keep your money. I've done my time. I want to laugh and smile. It's time to shout, `I'm breaking out!'

ELLIOTT: You do seem to be on a mission when it comes to the blues, too.

ELLIOTT: Why do you think that is?

Ms. COPELAND: Well, you know, I think when people hear `blues,' they just feel like, you know, it's sad music.

ELLIOTT: Or they think about old men from Mississippi.

Ms. COPELAND: Exactly. And that's really not the case because just like every other genre of music, blues has evolved and grown.

Ms. COPELAND: Well, I grew up in Harlem in the middle of the hip-hop era. And it was pretty much all hip-hop. It was very fresh and new then, and that's what they listened to. And I listened to a little bit of it, but I would go home and listen to my records, my Etta James records or my Johnnie Taylor records and my Koko Taylor records. You know, when I was a kid, I used to get in trouble because I would go to school and me and my friends, we'd be singing, (Singing) `I'm a woman. I can make love a crocodile,' you know stuff like that. And the teacher--Whoo! My goodness. She just could not understand and could not get with that.

ELLIOTT: She wasn't going for that.

Ms. COPELAND: She called my mom up and she said, `What is your child singing in school?' And my mom would get me back home and my parents would just laugh so hard about that.

ELLIOTT: But you had an excuse.

Ms. COPELAND: I had an excuse; a good one, too.

ELLIOTT: So I'm guessing he's the one who introduced you to a lot of this music.

Ms. COPELAND: Yes, he did. And my father was just--he loved music, and that's what I loved about my father. He wasn't just a blues artist; he loved music, world music, all sorts of music. So I ended up hearing a lot of different things. So that's great for me because my ears are open to everything.

ELLIOTT: You've also probably got to meet a lot of interesting people because of your father.

Ms. COPELAND: I did. I got to meet some interesting people. But being so young, you don't know who these people are. You just know that they played guitar and they sing. That's it. That's all I knew at this point. I had no idea it was Albert Collins and, you know, cats like that. So...

ELLIOTT: There's one song on "Soul Truth" that seems to be a commentary on the state of popular music today. I'd like to hear a little bit of "Who Stole My Radio?"

(Soundbite of "Who Stole My Radio?")

Ms. COPELAND: (Singing) I want passion, I want feeling. I want to be rocked from the floor up to the ceiling. Make it rough, make it smooth, just as long as I can feel the Earth move. But something's missing when I turn off the lights. I need some music to help me through the night. I want to know...

The best part about radio, I think, in the past was was that people got a chance to play things that reflected their personalities, you know, and that's what made radio so cool in the past. You just played something because you like it. And I think now a lot of radio disc jockeys and people are forced to play things just because it's what's popular and they don't really get a chance to play stuff that they like.

ELLIOTT: If they're even playing it.

ELLIOTT: I mean, most of the time it's all on a computer--Right?--being played for them.

Ms. COPELAND: Exactly. Exactly. So it's all computerized. And you got one person controlling everything, and that's just not the way it should be.

ELLIOTT: Your songs really have attitude, something...

Ms. COPELAND: I've got plenty of it.

ELLIOTT: You do, I'm telling you.

ELLIOTT: You sing like you've lived some kind of life already.

Ms. COPELAND: I have. You know, I have lived and I truly believe I've been here before, you know. I'm an old soul.

ELLIOTT: Where do you think that comes from?

Ms. COPELAND: Listening. What a lot of young people lack these days is they don't like to listen to anything. But me, I was like a sponge. I sat around and I listened to everything I could possibly listen to, and I picked it up: every conversation, every everything, my parents' conversations. When my father had friends over, you know, old blues cats, you know, I would listen to everything and I'd pick up everything, and I'd keep it and hold on to it. And that's why I believe I'm the way that I am.

ELLIOTT: There's a song I want to listen to a little bit that I think sort of reflects the wisdom that you have at your young age. It's called "Can't Have That." Let's listen.

(Soundbite of "Can't Have That")

Ms. COPELAND: I just think as a young woman, you have to have a certain amount of attitude, and you just have to have a love for yourself. I wouldn't say be stuck up and be conceited, but know what you got is something good. And if somebody wants it, they got to work hard for it. They have to prove to you that they want more of you than just one thing, and that's what that means. You know, I got a lot of--you know, my goddaughter is 10 years old, my niece is getting ready to turn nine years old. So I got these young women all around me, and I want them to know their worth. And I think that as long as you know your worth and know that you're something special, that you won't be able to get taken advantage of, and that's very important.

(Soundbite of "Can't Have That")

Ms. COPELAND: (Singing) Can't just love me and leave me in no time flat. You can have some of this, but you can't have that.

ELLIOTT: We're talking with Shemekia Copeland, whose new CD is "The Soul Truth."

Now you dedicated this record to the memory of your grandmother. Can you tell me a little bit about her?

Ms. COPELAND: Yeah. I was just talking about my grandmother. My grandmother could not have been more proud of me than anyone. She had a brag book, she called it, and she carried it around Greene County, North Carolina, showing it to everybody. And I truly miss her. She died a few months back, and it was really, for me, kind of sudden. You know, I didn't expect it. She was young for a grandma, only about 72. And I truly miss her. And she used to come to my gigs and things like that, and she was just a proud supporter of Shemekia Copeland. I lost one of my biggest fans when she left here, and we all miss her. Actually, her birthday's coming up real soon, so we're all going to get together and celebrate, celebrate her life.

ELLIOTT: Was she a strong woman, though? Did she instill in you this sort of sense of respect yourself?

Thank you so much for talking with us, Shemekia.

Ms. COPELAND: Thank you so much for having me. I appreciate it.

Ms. COPELAND: (Singing) The whole world is at my door every time I get a little bit more. Ohhh. I stay hungry all the time. But something keep tugging, tugging on my mind. I try to live in moderation, but that only gives me aggrevation. Oh, I need something heavy to keep me steady and ready. I need something heavy to keep myself together. I can't think till I get some satisfaction. It could be a pot of Memphis soul stew.