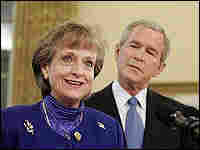 Supreme Court nominee Harriet E. Miers' 30-year career as a corporate lawyer and some-time public servant in Texas earned her a reputation not unlike her state's motto.

Miers, 60, is the White House counsel. She previously served as Mr. Bush's personal lawyer in Texas and took on the thankless job of cleaning up the Texas Lottery when Mr. Bush was governor there. She followed him to Washington to serve as staff secretary, the person who controls every piece of paper that crosses the president's desk. Most recently, Miers has helped the President vet candidates for the Supreme Court, including newly sworn-in Chief Justice John Roberts

At a news conference announcing Miers nomination, the President compared her to Roberts' predecessor, the late Chief Justice William Rehnquist. Neither Rehnquist nor Miers had experience as a judge before being nominated to the high court. "I've come to agree with the late Chief Justice William Rehnquist, who wrote about the importance of having judges who are drawn from a wide diversity of professional backgrounds," said Mr. Bush. "I'm proud to nominate an outstanding woman who brings a similar record of achievement in private practice and public service."

Mr. Bush's decision to nominate Miers is reminiscent of his deliberations over another key position: a vice-presidential running mate in the 2000 presidential campaign. He ended up choosing man who led the search, Dick Cheney. Miers, too, was on the search committee for Supreme Court nominees.

That said, she shares some qualities with Roberts, namely an exacting, no-nonsense style and a reluctant to be in the limelight.

Moreover, her lack of experience as a judge means there are few paper trails to divine her views on key issues, such as abortion and the death penalty. She gave little indication of how she might rule on such controversial topics at Monday's news conference. "I recognize that I will have a tremendous responsibility to keep our judicial system strong and help ensure that the courts meet their obligation to strictly apply the law and the Constitution," she said.

Once described by White House Chief of Staff Andrew Card as "one of the favorite people in the White House," Miers has been there for President Bush at every turn for more than a decade.

In 2004, Bush appointed her White House counsel, calling her "a talented lawyer whose great integrity, legal scholarship and grace have long marked her as one of America's finest lawyers." He articulated his high regard for her more memorably during a 1996 awards ceremony when he called her "a pit bull in size-6 shoes."

Card, in a 2003 interview with the publication Texas Lawyer, said Bush's affinity for Miers is obvious in the frequent invitations she receives to visit the presidential retreat at Camp David, "a privilege that is not enjoyed by a lot of staff."

"She's a quiet, highly respected force and someone who is seen as not having any agenda other than the president's," he said.

Intensely loyal, Miers seems happy to stay off the radar screen as long as her boss is happy, on the thinking that White House counsels only make news when there's been a mistake. "Hopefully, there aren't any," she told the Dallas Morning News earlier this year. "So, we stay out of the headlines."

At the same time, however, she showed her readiness to take on difficult questions. "Lawyers by nature are involved in controversy," she said. "We expect difficult issues and are prepared to deal with them."

Bush underscored her toughness, observing when he was governor, "When it comes to a cross-examination, she can fillet better than Mrs. Paul."

As staff secretary, Miers was with the president in Florida when the terrorist attacks unfolded on Sept. 11, 2001, and she later remembered the regard she felt for him as she scrambled to help prepare his remarks to the nation that night. "It took some time, and the president saw me hurrying to give them to him," she recalled. "He said, 'Good hustle.' He made me feel good that I was contributing. Typical."

Miers is a self-described "Texan through and through." She grew up in Dallas and received both her undergraduate and law degrees from Southern Methodist University. She clerked for a federal judge there and then joined Locke Purnell Rain Harrell in 1972, rising to become first woman president of the firm in 1996. When her firm merged with another, she became co-managing partner of the 400-lawyer Locke Liddell & Sapp.

"Harriet is not a person that gets frustrated easily," R. Bruce LaBoon, a former law partner, told Texas Lawyer. "She doesn't lose her temper. She is very cool and calm in a storm."

Miers, who is single, is known for putting in long hours without complaint. She is said to often arrive at work at 4:00 a.m. and not leave until 10:00 p.m. Education Secretary Margaret Spellings, a fellow Texan who earlier served alongside Miers in the White House, told Texas Lawyer in 2003 that Miers was "here before dawn and after dusk and on most weekends. No one works harder."

Miers reveals little of her own emotions or ideological persuasions, but has been an enthusiastic supporter of the Bush administration on a broad of initiatives including tax cuts, Social Security reforms, restrictions on federal spending on embryonic stem cell research, national security, education reforms and fighting terrorism.

In hosting an "Ask the White House" interactive forum on the Internet before the 2004 elections, Miers lavished praise on a litany of Bush administration initiatives, then added, "I could go on and on."

The Associated Press contributed to this report