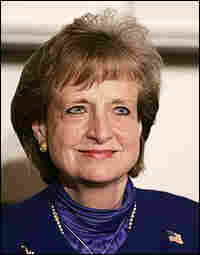 Early responses to Harriet Miers range from the enthusiastic to a call for the White House to release more background information on the nominee. Larry Downing/Reuters hide caption

President Bush: I believe the senators of both parties will find that Harriet Miers' talent, experience and judicial philosophy make her a superb choice to safeguard the constitutional liberties and equality of all Americans. Harriet Miers will strictly interpret our Constitution and laws. She will not legislate from the bench.

Hear what members of Congress and court watchers have to say about Harriet Miers' nomination:

Senate Majority Leader Bill Frist, R-Tenn.: With this selection, the president has chosen another outstanding nominee to sit on our nation's highest court. Ms. Miers is honest and hard working and understands the importance of judicial restraint and the limited role of a judge to interpret the law and not legislate from the bench.

Senate Minority Leader Harry Reid, D-Nev.: The Supreme Court would benefit from the addition of a justice who has real experience as a practicing lawyer. The current justices have all been chosen from the lower federal courts. A nominee with relevant non-judicial experience would bring a different and useful perspective to the court.

Sen. Ted Kennedy, D-Mass.: As far as we know at this point, Ms. Miers does not have a public record of writings or speeches that would give the senators and the American people an insight into the kind of justice she would be. Therefore, we urge President Bush to make available to the Committee documents and information relating to Ms. Miers's service in the White House during both terms of the George W. Bush Presidential Administration and for Mr. Bush during his terms as governor of the State of Texas ... The record we have so far is simply insufficient to assess the qualifications of this nominee. While her resume lists impressive qualifications as a practicing attorney, it simply does not give the Senate -- or the public -- sufficient information to determine her qualifications to be a Supreme Court justice and her commitment to core constitutional values.

Sen. Patrick Leahy of Vermont, Ranking Democrat on the Judiciary Committee: In some ways, this is more crucial than John Roberts' seat for chief justice. This one is for Sandra Day O'Connor's position, and Justice O'Connor, to her credit, has been one willing to be a swing vote on a number of decisive cases. She has not locked herself into a rigid judicial philosophy. She's looked at each case as it came down before the court and has brought a significant life experience to her decision. That makes it critical that we do our job right.

Tom Phillips, Former Chief Justice on the Texas Supreme Court: She is a very bright, careful, conscientious lawyer and she has a marvelous temperament. She led the state bar and our state lottery commission during some very fractious times and she has a remarkable ability to listen to people and forge consensus, and I think she will be a marvelous judge.

Sen. Chuck Schumer, D-N.Y.: We know even less about Harriet Miers than we did about John Roberts and because this is the critical swing seat on the court, Americans will need to know a lot more about Miers' judicial philosophy and legal background before any vote for confirmation.

Sen. John Cornyn, R-Texas.: Harriet Miers is a brilliant legal mind. She is a woman of outstanding character who clearly understands what it means to follow the law. She is deeply committed to public service, and has a distinguished history of professional achievement. It is clear that her past experiences have well prepared her for the honor of serving our country as a Supreme Court Justice.

Karen Pearl, Interim President of Planned Parenthood: We are concerned about the nomination of Harriet Miers and we demand she answer questions regarding her views of fundamental reproductive and privacy rights. We expect Miers to make clear her views on reproductive rights during the hearing process, and the Senate should not confirm a nominee who is not willing to do so.

Eugene Delgaudio, President of the Public Advocate, a conservative advocacy group: The president's nomination of Miers is a betrayal of the conservative, pro-family voters whose support put Bush in the White House in both the 2000 and 2004 elections and who were promised Supreme Court appointments in the mold of Thomas and Scalia. ... When there are so many proven judges in the mix, it is unacceptable this president has appointed a political crony with no conservative credentials.

Ralph G. Neas, President of People for the American Way, a liberal public advocacy group: With no past judicial experience for the senators to consider, the burden will be on Miers to be forthright with the Senate and the American people. She must outline her judicial philosophy and provide direct answers to questions about how and whether she will uphold fundamental rights, liberties and legal protections on which Americans rely. ... There must be no rush to judgment.

Sen. Barbara Mikulski, D-Md.: We owe it to the American people to take our time to be sure the nominee will uphold their most basic and fundamental rights. The public demands this from the process, and deserve no less.

Attorney General Alberto R. Gonzales: I have worked with her for many years and have seen firsthand her legal acumen and know that she will be a credit to the court and this nation. She has risen to the very top of the legal profession, earning the respect of all who know her. Ms. Miers would bring to the Court her brilliance, dedication, and her commitment to the rule of law and equal access to justice for all.

Artemus Ward, Northern Illinois University Political Science Professor: This is a smart move. You try to pick a nominee that Democrats won't be able to criticize as much because they are a woman or minority. This is a classic Clarence Thomas strategy.