Accessibility links
Roasting the Funky Chicken A roasted chicken is just about everyone's favorite. Easy, inexpensive, aromatic and delicious. What more can a cook of any age ask for? Food writer Victoria Rowan shares her ideas and tips for the perfect bird. 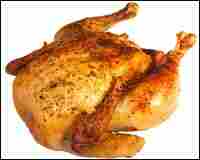 Roasting a chicken is blessedly easy. Tips and recipes for a full Asian feast and classic American dinner are below. hide caption

I descend from a long line of entertainers. My family believed that the best way to demonstrate our affection for others was to throw a dinner party. From the time I learned to walk, I've passed hors d'oeuvres and daydreamed about the menus I would serve when I ruled my own roost.

Not surprisingly, I was a precocious hostess. In my teens, I took advantage of my parents' overnight absences not by throwing rowdy keggers but by inviting friends over for themed sit-down dinners, complete with place cards and glam attire, s'il vous plait! (The overdressing added to the festivity and care for our finery vastly improved chances that the upholstery would survive the night unscathed.)

Financing these affairs on babysitting wages did not interfere with my grand aspirations. A crisp-skinned chicken, roasted alongside onions and potatoes, was economical and made for sumptuous presentation. Even now, when I splurge on free-range, organic poultry, chicken is cheaper-per-head than vegetarian or pasta dishes, and certainly less than any red meat or seafood.

Victoria C. Rowan is a New York City-based writer specializing in subjects bon-vivant. She is proud to have illustrated a cookbook for her goddaughter's school, Food We Love by the Kids and Grown-Ups of the Woodstock Day School.

Preparing a roaster is blessedly simple. I can still wow with the simplest prep -- slip some fresh thyme, lemon slices and a few pats of butter under the skin and pop the bird in a hot oven. As it cooks, the chicken generates its own jus that I prefer to time-consuming sauces and gravies.

Over the years, as I've experimented with any number of world cuisines and seasonings, the chicken has proven infinitely versatile. My current favorite crowd-pleasing preparation is a Malaysian version (thank you Madhur Jaffrey!) basted in a grated ginger-onion-soy sauce.

No matter whether I've given the bird a Mediterranean or a traditional Pilgrim makeover, it never fails to cast an aromatherapeutic spell over the guests. The savory smells that waft into the living room over cocktail hour have the bewitching effect of advance-hyping the meal and inspiring chef-assisting offers that can carry over the whole night from plate running to bussing and dishwashing.

There's also the pop-psychology insight gleaned from your guests' requests for white or dark meat, drumsticks or wings. And for a picayune door prize, I send a lucky guest home with the wishbone.

For a final and virtuously thrifty hurrah, there is no more appropriate way to honor the previous night's carcass than to give it a second life as a homemade broth. Chicken soup can also be creatively flavored any number of ways. For warmer weather, lemon and herbs are refreshing. For snappish days, I add my grandfather's "fortifying" splash of sherry.

Of course, the broth can also be frozen -- a culinary nest egg for future celebrations.

A few tips and rules for roasting chicken:

* An unstuffed 4-pounder can cook in a foolproof hour: 400 degrees for 15 minutes per pound.

* To keep the house cooler and cooking time down, cook two or more smaller birds for a group, rather than a jumbo.

* To crisp the skin, rub olive oil or melted butter and sea salt over the bird and be certain the oven is fully preheated.

* As to the many fancy pans and equipment for roasting a chicken that can prey upon a cook's insecurity, a 2-inch deep roasting pan, thoroughly wrapped in foil, works swell for the bird and for ease of cleanup. Also, I think letting the chicken roast in its juices keeps the meat moist. But if a crisp skin is your top priority, a simple rack -- even a cooling rack resting in the pan -- that lets the fat run off will do the job.

* A chicken should be cooked until the thermometer registers 180 degrees at the thickest part of the thigh, but unless you're an expert on chicken anatomy and keep the thermometer safely away from the bone, getting an accurate reading is tricky. I use a more old-fashioned test: When the leg skin has pulled taut from the body and the juices run clear, it's cooked.

* While I'm not one for gadgets, a fat separator is great for saving the jus.

Adapted from Madhur Jaffrey's A Taste of the Far East.

Blend all ingredients in an electric blender or food processor in batches. Put the chicken in a roasting pan. Using half the marinade, rub the chicken, inside and out, and leave for 1 hour.

Preheat the oven to 400 degrees; plan on roasting for 15 minutes a pound.

Pour as much of the soy sauce mixture into the cavity of the chicken as it will hold easily. You can raise the tail end of the chicken slightly by putting the neck under it so that the liquid will stay in. Baste periodically, but allowing the skin to blacken. If the sauce in the pan begins dry out and get scorched, add 1 tablespoon or so of water to the pan and scrape it quickly.

Depending on what fresh produce looks good, I recommend either broccoli raab or bok choi sauted with peanut or sesame oil and garlic. If nothing looks inspiring, get frozen shelled edamame and toss with some oil and garnished with Japanese seasalt/seaweed/toasted sesame seed spices (Eden Shake and Japanese brands labeled "rice topping" are now widely available at Asian delis and health-food stores).

Heat oven to 400 degrees. Rub chicken inside and out with salt, pepper and herbs. At cavity end, loosen skin from breast and stuff 2 slices lemon and 1 tablespoon of butter on each side of breast. Place remaining lemon directly in chicken cavity. Transfer to roasting pan. Roast 15 minutes per pound, basting occasionally. Transfer chicken to cutting board and allow to sit 10 minutes before carving. Use a fat separator to isolate the juices from fat and serve with a drizzle of the jus.

Adapted from The Fannie Farmer Cookbook by Marion Cunningham.

Melt the bacon fat in a skillet, add the sugar and cook, stirring for 2 minutes. Add the onion and cook slowly until lightly colored. Stir in the cabbage, apples, vinegar, cayenne and red wine. Cook over low heat, covered, for 10 minutes, then add the water and cook, with cover askew, stirring occasionally, for 40-50 minutes more -- the slower the better. (It can be left on the stove and checked periodically as you prepare other items.) Add salt to taste. Serve hot or cold.

Saute short-grain brown rice with olive oil and a little minced garlic (1-2 cloves per cup of rice), substitute a mixture of wine and broth for water and cook according to directions.

Adapted from The Fannie Farmer Cookbook by Marion Cunningham.

First, strip all meat from the bones for sandwiches or for dicing to put in the finished soup. Put the bird in ample, thick-bottomed caldron and cover with water (about a half-gallon). Boil with leftover vegetables (or clear out your fridge of anything wilting), such as carrots, celery, onions and garlic. Add herbs, bay leaf and/or peppercorns as you wish.

Boil as long as you like smelling chicken in your house (a minimum of 4-5 hours). (If you are concerned about chicken grease permeating the house, definitely close the door and turn on the fan to the kitchen.) When finished, strain out the bones, skin and depleted vegetables and allow to cool for a few hours before refrigerating so you don't defrost/spoil other things in your fridge. Once it's thoroughly chilled, the fat will congeal on the top and you can skim it off for cooking other dishes or discard. Freeze leftovers in ice trays or in pints or quarts for future use.