On how she felt about the leak

Better Version of Me

It would be easy to worry about Fiona Apple. With her fair skin, small physique and crystal green eyes, she often looks a little scared or melancholic in photographs. In person, she's self-assured.

Fiona Apple fans sent more than a thousand foam apples to Sony in an effort to get the company to release songs by the artist. Sony BMG hide caption 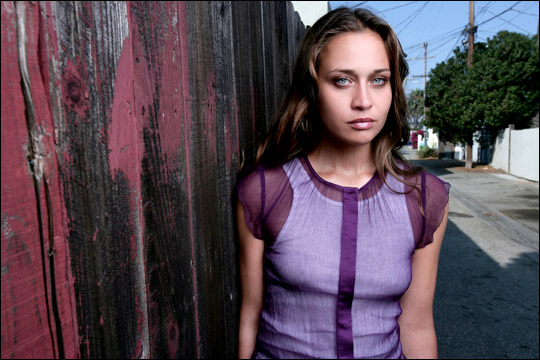 Fiona Apple fans sent more than a thousand foam apples to Sony in an effort to get the company to release songs by the artist.

With the title song of her new recording Extraordinary Machine she let her friends and family know that she can handle herself.

Fiona Apple was in her late teens when her first CD became a very big seller. Her songs often reveal her innermost secrets.

Fiona Apple is also known for outward displays of emotion, which some critics have found unbearable.

There was certainly a bit of drama around her new CD.

More than two years ago Fiona Apple and producer Jon Brion started working on some new songs. The songs were never officially released, although they leaked out onto the Internet.

It's not clear whether, or why, the songs were bottled up by Sony or Apple.

But Apple went back to work on the material after fans mounted a campaign to get the songs released commercially. This time, however, she dropped producer Brion from the project.

Like her previous work, Fiona Apple's new songs examine what can go wrong in a couple.

Album
When The Pawn Hits The Conflicts He Thinks...
Artist
Fiona Apple