Accessibility links
Pregnancy Warning Added to Paxil Label Babies exposed to Paxil early in pregnancy may have a higher risk of major birth defects, according to a new study. The results contradict earlier studies, but the FDA is reviewing the findings and GlaxoSmithKline has sent a warning to physicians. 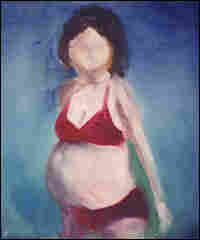 A priority for women suffering from depression is how best to insulate their children from it, says painter and mother Amy Newell. Amy Newell/American Radioworks hide caption

Drugmaker GlaxoSmithKline has sent a warning letter to doctors, advising that the antidepressant Paxil may be linked to a slightly higher risk of birth defects in babies exposed to the drug during the first trimester of pregnancy. The company also has added the warning to its Paxil label. This comes on the heel of a new study requested by the Food and Drug Administration.

— Two percent of women taking other antidepressants had babies with congenital birth defects.

— The rate of similar birth defects in the general public is three percent.

— A separate Swedish study found no increased risk for major birth defects in infants exposed to Paxil in early pregnancy.

— Earlier studies have found that babies exposed to antidepressants toward the end of pregnancy may suffer withdrawal.

The FDA's Dr. Sandra Kweder says the agency had requested the study, but it also was surprised by the results. "It does conflict with other information that's been available," she said. "For that reason, we decided better to be safe and put that information out there."

The FDA has posted Glaxo's letter on its Web site, but Kweder adds the Paxil label has always warned doctors to weigh the potential risks and benefits of prescribing drugs in this class during pregnancy.

Dr. Lee Cohen, a perinatal psychiatrist at Massachusetts General Hospital, cautions that the new findings don't mean pregnant women who are currently taking Paxil should stop taking the drug. Exposing a baby to the mother's depression is also a health risk, he says. Women who are depressed don't take as good care of themselves, says Cohen, and are more likely to use drugs and alcohol, eat poorly and miss prenatal appointments. Research also suggests that women with depressive symptoms during pregnancy have children with lower birth weights.

The FDA plans to review the new information about Paxil and pregnancy over the next few months to decide whether the additional warning on the label is sufficient.