Accessibility links
'Sigmund' and Other Krofft Shows Resurface on DVD Sid and Marty Krofft created some of television's most memorable hits -- and disastrous flops. The Kroffts are experiencing somewhat of a resurgence as their shows -- including H.R. Pufnstuf -- are re-released on DVD.

Listen
'Sigmund' and Other Krofft Shows Resurface on DVD 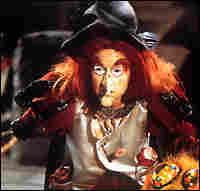 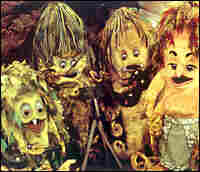 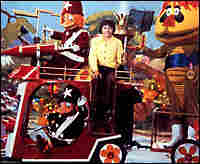 Jimmy (center, played by actor Jack Wild), along with deputies Cling and Clang and the Mayor of Living Island on H.R. Pufnstuf. Sid and Marty Krofft Pictures hide caption

Sid and Marty Krofft created some of television's most memorable hits -- and disastrous flops. They were best known in the '70s for psychedelic Saturday morning kids shows. Among them, H.R. Pufnstuf, the story of a boy, a magic flute and a dragon with white boots and a Southern drawl.

The Kroffts also created primetime song and dance programs, including the Donny and Marie Show.

The Kroffts are experiencing somewhat of a resurgence as many of their most famous creations are re-released on DVD.

There was Lidsville, a land occupied solely by hats that walk, talk and sing. Sigmund and the Sea Monsters told the story of two boys and their friend -- a pile of seaweed that washed up on the beach. The most famous Krofft kid's show was H.R. Pufnstuf.

The Krofft shows all had two things in common. They were colorful and a little bit weird.

Most of the Krofft characters were larger-than-life puppets. The brothers Krofft came from five generations of puppeteers.

But Sid and Marty went beyond puppets. They also struck gold with variety shows in the mid-70s.

The Kroffts ventured into primetime with Donny and Marie Osmond. Their variety show was a big hit. They scored again with yet another variety show -- this one featuring country music superstar Barbara Mandrell.

In between there were some unfortunate creations, like The Brady Bunch Variety Hour.

But the Kroffts have been resilient. Right now, they're developing a Pufnstuf movie. They're also working on a big-screen version of their science fiction series The Land of the Lost.

The theme song for the show sets up the conflict — between the boy, Pufnstuf and the witch — that drives the story.

Who's your friend when things get rough

Can't do a little, 'cause you can't do enough

Once upon a summertime

Just a dream from yesterday

A boy and his magic golden flute

Heard a boat from off the bay

"Come and play with me Jimmy

Come and play with me

And I will take you on a trip

Far across the sea"

But the boat belonged to a kooky old witch

Who had in mind the flute to snitch

From her broom broom in the sky

She watched her plans materialize

She waved her wand

The beautiful boat was gone

The sky grew dark, and the sea grew rough

But Pufnstuf was watching too

And knew exactly what to do

He saw the witch's boat attack

And as the boy was fighting back

He called his Rescue Racer Crew

And off to save the boy they flew

But who would get there first

But now the boy had washed ashore

Puff arrived to save the day

Which made the witch so mad and sore

She shook her fist and screamed away

Who's your friend when things get rough

Can't do a little, 'cause you can't do enough