Accessibility links
'Spook', Searching for Proof of an Afterlife Mary Roach has a knack for bringing the dead to life. In Stiff: The Curious Lives of Human Cadavers, she chronicled the strange careers of the dead. In Spook, she explores the world of life after death.

Listen
'Spook', Searching for Proof of an Afterlife 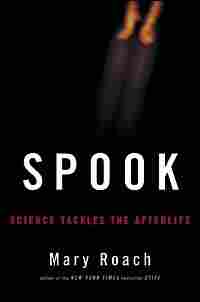 Detail from the cover of 'Spook' hide caption

Salon writer and journalist Mary Roach has a knack for bringing the dead to life. In Stiff: The Curious Lives of Human Cadavers, she chronicled the curious careers of the dead. In her new book Spook: Science Tackles The Afterlife, Roach searched for scientific evidence of what happens after we die; proof of an afterlife. She talks about her search, which took her to places as disparate as rural India and the hallowed halls of Cambridge University.

Read an Excerpt from Chapter One:

Dr. Rawat is telling me that the case we are investigating is fairly typical. The child, Aishwary, began talking about people from a previous existence when he was around three. Ninety-five percent of the children in Stevenson's cases began talking about a previous existence between the ages of two and four, and started to forget about it all by age five.

"Also typical is the sudden, violent death of the P.P."

"The previous personality." The deceased individual thought to be reincarnated. "We say 'P.P.' for short."

Aishwary is thought by his family to be the reincarnation of a factory worker named Veerpal, several villages distant, who accidentally electrocuted himself not long before Aishwary was born. Dr. Rawat opens his briefcase and takes out an envelope of snapshots from last month, when he began this investigation.

"Here is the boy Aishwary at the birthday party of his 'son.'" Aishwary is four in the photograph. His "son" has just turned ten. Just in case the age business isn't sufficiently topsy-turvy, the elastic strap on the "son's" birthday hat has been inexplicably outfitted with a long, white beard. This morning, while leafing through a file of Dr. Rawat's correspondences, I came across a letter that included the line: "I am so glad you were able to marry your daughter." I am reasonably, but not entirely, sure that the correspondent meant "marry off."

Rani is the dead factory worker's widow. She is twenty-six years old. In the photo, the boy stares fondly -- lustfully, one might almost say, were one to spend too much time in India with reincarnation researchers -- at his alleged past-life wife. This strikes me as the most improbable, chimerical thing I've ever seen, and then I look out the car window, where an elephant plods down a busy Delhi motorway.

Living in California, where alleged reincarnations tend to spring from royalty and aristocracy, a reincarnated laborer is something of a novelty for me. Dr. Rawat says that this is typical here: "These are ordinary people remembering ordinary lives." Though there are exceptions. At last count, he has met six bogus Nehru reincarnates and eight wannabe Gandhis.