Golijov: Writing for the Voice

Argentinean-born composer Osvaldo Golijov is one of the hottest young voices in classical music, creating visceral compositions that embrace influences from tango to klezmer. 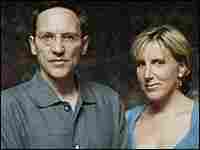 One of his frequent collaborators is superstar soprano Dawn Upshaw; the two have teamed up on a new song cycle called Ayre, which has just been released on CD.

The songs in Ayre (a medieval Spanish word meaning air or melody) are settings of traditional Jewish, Arabic and Christian folk melodies and texts. The result is a work of cultural and emotional juxtaposition: Beautiful melodies are set to ugly texts, and expressions of love and anger live side by side.

Golijov also calls upon Dawn Upshaw to explore new areas of expression in her voice. Upshaw is a singer well known for her pure soprano, but Golijov has her bring out her "evil witch."

Upshaw is taking the song cycle across the United States and England. Later this season, Lincoln Center's Great Performers series is presenting a festival of Golijov's compositions.