Accessibility links
When Hard Labor Taught a Lesson Monica Mayer's father made sure his daughters took their work seriously. Worried the girls were slacking off in middle school, he arranged his own version of a "boot camp." The result not only cured them of their bad habits -- it gave Mayer and her sisters a story they vividly recall. 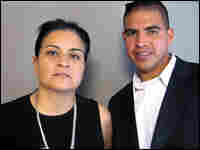 Recently, one of the two StoryCorps mobile recording booths spent a week on the Fort Berthold Indian reservation in North Dakota. There, Monica Mayer shared a story of growing up in the area in the 1960s.

As she tells her friend Spencer Wilkinson, Jr., Mayer's father made sure his daughters would take work seriously. Her parents had grown concerned the three girls were slacking off in middle school.

A day spent working in a barren rock field cured them of that -- and provided a story the daughters can still recall in close detail today.

Monica Mayer returned to Fort Berthold after receiving her medical degree and now works on the reservation as a family physician. Her two sisters, Holly and Renee, also serve the Fort Berthold community -- one in nursing and the other in social services.

StoryCorps is an oral history project currently traveling the country to collect stories. Excerpts from the discussions are aired each Friday on 'Morning Edition'.