Accessibility links
Stinky Cheese Maker Shuns 'Wallace & Gromit' Spotlight Wallace & Gromit is bringing unwanted attention to a cheese maker in England. Wallace is a well-known lover of cheese; the latest film mentions a rare cheese called Stinking Bishop, made by Charles Martell on a farm in Gloucestershire, England. He says the notoriety is already creating too much demand on his small business.

Wallace & Gromit is bringing unwanted attention to a cheese maker in England. Wallace is a well-known lover of cheese; the latest film mentions a rare cheese called Stinking Bishop, made by Charles Martell on a farm in Gloucestershire, England. He says the notoriety is already creating too much demand on his small business. 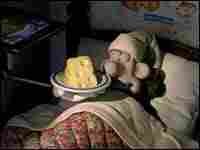 Wallace dreams of cheese in a scene from Wallace & Gromit: The Curse of the Were-Rabbit. DreamWorks Animation hide caption

Here's an important detail about Wallace that you should know. He is a great lover of cheese.

(Soundbite from "Wallace and Gromit: The Curse of the Were-Rabbit")

SIEGEL: Now we have it on good authority that on the strength of "Wallace and Gromit" alone Wensleydale cheese has become a favorite cheese of British schoolchildren. Wensleydale, we are assured, is a chalky cheese and was a popular cheese in the UK even before becoming a best-seller. So what will happen to the cheese featured in the new "Wallace and Gromit" release during which Wallace, the man, faints and is revived by a whiff of a fragrant English cheese named Stinking Bishop, which is a real cheese made by just one real cheesemaker, Charles Martell, who joins us from Gloucestershire.

Mr. Martell, are you ready for "Wallace and Gromit" fans in the millions to start ordering Stinking Bishop?

Mr. CHARLES MARTELL (Cheesemaker): No, I'm not, but I'm afraid it's started already. The film hasn't gone out and our orders have increased 500 percent. So we've got a problem already.

SIEGEL: You don't make all that much Stinking Bishop, I gather?

Mr. MARTELL: No, we're very small. It's just me and two assistants, and we make about 123 pound cheeses a day, 20 tons a year, which in the grand scheme of things is absolutely nothing.

SIEGEL: But 20 tons a year, you're looking already at conceivably 100 tons a year and you think it's going to multiply beyond that.

Mr. MARTELL: Yes. The only problem is we can't expand. We're a small farm. The vat that contains the milk is only 300 gallons. So we can't wave a wand and make it bigger, and, in fact, I don't want to be any bigger. We're very happy here. I love cheesemaking and I want to stay as I am. So I don't know quite what happens next.

SIEGEL: Have you thought about marketing it in very, very small pieces so it could go around some more?

Mr. MARTELL: Well, the trouble is when you cut it, it sort of runs everywhere. It's got a sort of leathery coat and inside it can be almost liquid. So I've obviously thought of that, but I don't think it's a starter.

SIEGEL: Well, between that description and the name Stinking Bishop, it sounds like a very attractive cheese.

Mr. MARTELL: Well, 90 percent of people will think it's disgusting because of the smell. But, in fact, if you can get past the smell it's not too bad inside. We always say 0its bark is worse than its bite.

SIEGEL: (Laughs) And how do people typically eat their Stinking Bishop? Is it, you know, as a dessert cheese or before their meal or...

Mr. MARTELL: Yes. Personally, I eat it on its own, just from a knife. Disgusting manners I've got, but--and possibly with a glass of perry, which is the pear cider, if you like, but it's washed in to produce the smelly rind. It sort of seems to marry well with the cheese if you can be brave enough to get that far.

SIEGEL: Is--I gather my use of the word `fragrant' was an understatement?

Mr. MARTELL: It was an understatement. But the reason it's called Stinking Bishop is actually it's one of the varieties of perry pear that grow in this--just in this part of England, which, in turn, was named after a man called Bishop, who was an unsavory character, very impatient. When he couldn't boil his kettle he shot it. So he was a bit of a local character. Anyway he bred this pear originally in the middle of the 19th century and his nickname got attached to the pear which then now has become attached to the cheese.

SIEGEL: Do you have either a friend or a bad enemy involved in the production of this movie who has put you in this predicament?

Mr. MARTELL: No, we just don't know why they--I think they picked up the idea just because of the name of the cheese. They thought, oh, this is fun because that's how the makers are. They're a bit, we say quirky in English.

SIEGEL: Mm-hmm, we say that too in English here.

SIEGEL: Yeah, we do.

Mr. MARTELL: Sorry, I didn't mean to offend anybody. So I think they just liked the name.

SIEGEL: Thank you very much for your time, Charles Martell of Gloucestershire, cheesemaker, who makes and is the only person makes, Stinking Bishop cheese. Thanks a lot for talking with us.

Mr. MARTELL: Thanks very much.

SIEGEL: You're listening to ALL THINGS CONSIDERED from NPR News.

A Description of Stinking Bishop Cheese
'Wallace & Gromit: The Curse of the Were-Rabbit'