Accessibility links
A 'Murrow Boy' Screens 'Good Night' Daniel Schorr watched a new film about the confrontation between journalist Edward R. Murrow and Sen. Joseph McCarthy -- Good Night, and Good Luck -- from a rare perspective. Schorr is the last active member of the group of journalists known as "Murrow's Boys."

Daniel Schorr watched a new film about the confrontation between journalist Edward R. Murrow and Sen. Joseph McCarthy — Good Night, and Good Luck — from a rare perspective. Schorr is the last active member of the group of journalists known as "Murrow's Boys." 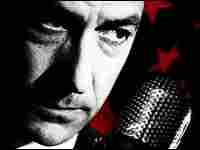 A new movie about famed newsman Edward R. Murrow opened this past Friday. The last active member of the group of journalists known as Murrow's boys happens to be NPR senior news analyst Daniel Schorr. He just saw the film.

It is not often that you see a film about a historic time done with such insight as to transport you back to that period. That's how it was with "Good Night, and Good Luck," George Clooney's magnificent re-creation of the struggle between Senator Joseph McCarthy and journalist Edward R. Murrow for the conscience of America.

I was one of the CBS correspondents who covered McCarthy's red-baiting hearings that destroyed the reputations of honorable men and women. But it was only Murrow who had the stature and the sheer guts to take on McCarthy by playing back some of his ranting assaults on anyone who had read a liberal magazine.

I would say that you had to be there but, in fact, you didn't, so skillfully re-created in this black-and-white film was the atmosphere in which it happened. The year was 1954. Is it already half a century? World War II was behind us, the Cold War was sending a shudder through the country, providing golden opportunities for cynical politicians who, as the saying of the time had it, saw a Red under every bed.

Television then was still in its early days and Murrow had to combat not only McCarthy but his own nervous boss, William Paley, who feared losing sponsors. In those days, television shows had individual sponsors, and Murrow's "See It Now" series was sponsored by Alcoa, Aluminum Company of America. Paley told Murrow that his controversial documentaries gave him a stomachache and, indeed, after the devastating McCarthy film aired, Alcoa did not renew its sponsorship of "See It Now."

These days, Murrow is widely credited with having brought down McCarthy. That's probably an exaggeration. McCarthy in the end was brought down by his own colleagues in the Senate, who thought that the red-baiting senator was giving Republicans a bad name. But Murrow launched the attack on McCarthy long before it was the popular thing to do, and Murrow set the standard for integrity in the media.

That was not to be the last time that journalists, to fulfill their mission, would have to take on sponsors and, yes, sometimes their own bosses. Just for old time's sake, let me say good night, and good luck. This is Daniel Schorr.

HANSEN: It's 22 minutes before the hour.