Accessibility links
Mudslides Kill Hundreds in Guatemala Weeks of rain have brought on mudslides throughout Central America. Guatemala is the hardest hit country with more than 600 people dead and hundreds more missing.

Weeks of rain have brought on mudslides throughout Central America. Guatemala is the hardest hit country with more than 600 people dead and hundreds more missing. 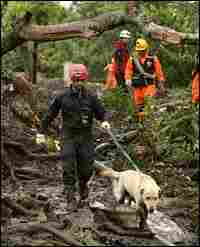 Spanish rescue workers use a search dog to look for mudslide survivors in Panabaj, Guatemala, Oct. 9, 2005. The firefighters were unable to find signs of life at the site. Reuters hide caption 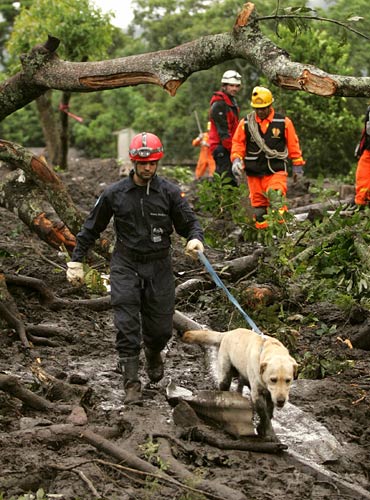 Spanish rescue workers use a search dog to look for mudslide survivors in Panabaj, Guatemala, Oct. 9, 2005. The firefighters were unable to find signs of life at the site.

Nearly a week after Hurricane Stan, more than 650 people are dead and hundreds more are missing across Central America and southern Mexico. The hardest hit country is Guatemala where more than 500 bodies have been recovered. The country's emergency services say the actual death toll could be more than 3,000. Fact is, more than 100 communities are cut off by mudslides and flooding. Lorenda Reddekopp reports.

The cleanup effort is slow. Large construction equipment is almost useless in some areas. The mud is too deep. Villagers have to push this machine to keep it from getting stuck. In the village of Panabaj near Lake Atitlan, the mud is making it impossible for family members to find their loved ones. A mudslide buried people and houses. The village may be declared a mass grave site.

Across the country, fast muddy rivers have destroyed bridges, homes and highways. In the western highlands town of Olintepeque, many have lost everything, and people can only cross the weakened bridges by foot. Mayor Cruz Chavez(ph) says that with problems in much of Guatemala, help could take a while. His eyes tear up as he talks about what people here are living through.

REDDEKOPP: He says the hardest thing is to see his people with tears, with sadness at having abandoned homes that took 20 or 25 years to afford to build. `They've lost them in a second,' he says. `This is what makes me saddest,' he adds.

In the nearby city of Quetzaltenango, emergency centers have opened in schools and other buildings. Yvonne Jimenez(ph) had nowhere else to go. Food, clothing, furniture, everything she owned was destroyed. She'll likely be out of a job, too. The restaurant she works in was also underwater.

REDDEKOPP: She cries as she explains that they need people to help and she says this isn't the first time for a tragedy like this here, referring to Hurricane Mitch. But already the effects of Hurricane Stan in Guatemala are even worse than Mitch in 1998. Government officials say it could take a year to fix all the roads. Osman Rossil is with the Justice Pastoral(ph), a Catholic human rights organization. He compares the problem here to another hurricane in New Orleans. Rossil says it'll be years before Guatemala recovers.

REDDEKOPP: In the western highlands, the rains continue. Some communities in the region have been cut off from the rest of the country. All roads have been destroyed. Eduardo Stein is the country's vice president. He says rain and fog mean getting to those areas is still impossible.

REDDEKOPP: He says that unfortunately changes to the weather are extremely slow and that's making air access incredibly difficult, and that difficulty will likely continue today. The weather isn't expected to improve until tomorrow. For NPR News, I'm Lorenda Reddekopp in Quetzaltenango, Guatemala.