Accessibility links
Book Documents Struggle for Slavery Reparations Over a century ago, an ex-slave named Callie House demanded that the U.S. government pay ex-slaves for unpaid labor. Activist and author Mary Frances Berry documents House's reparations movement in a new book, My Face is Black is True: Callie House and The Struggle for Ex-Slave Reparations. Ed Gordon talks with Berry.

Over a century ago, an ex-slave named Callie House demanded that the U.S. government pay ex-slaves for unpaid labor. Activist and author Mary Frances Berry documents House's reparations movement in a new book, My Face is Black is True: Callie House and The Struggle for Ex-Slave Reparations. Ed Gordon talks with Berry.

Should black Americans receive reparations or compensation because of slavery? That's a question that Americans have struggled with for more than a century. Now author Mary Frances Berry tackles that topic and more in her new book. NPR's Ed Gordon has the story.

Dr. MARY FRANCES BERRY (Author): Well, thank you very much for having me.

GORDON: ...in this role, we should know that normal listeners hear you often on our roundtable, but here you're--today you're here to sell the book.

Dr. BERRY: Right. This is a book, "My Face is Black is True: Callie House and The Struggle for Ex-Slave Reparations." And this book, Ed, is about a black woman who, in 1897, she started a movement to organize old ex-slaves, some of whom were, you know, as she said decrepit by then, sick and poor, she had a movement to organize them to set up chapters for self-help. That was the first thing, that if somebody died, they would bury them. If somebody got sick, they'd put their pennies together and help them because at that time blacks were not insured. The insurance companies thought we were gonna die out after slavery.

And the second thing was to send petitions to the federal government asking the government to give them money for the slavery without wages, the work they had done. She wanted $12 a month for anybody who was over age 80, and she wanted $5 a month for anybody who was under age 50. And so she started this to organize, using the churches. People were very eager to get engaged. For those who couldn't write, somebody else would write their name down. And she said, `Well, we don't know how long it'll take for the government to do this or if they ever will, but we're gonna try to get the name of every ex-slave on a petition so they will be there for the generations to come.'

GORDON: When we look back at this woman's life, what was its finality for her personally?

Dr. BERRY: Let me tell you first that she was not a well-educated woman. She was a washerwoman. She took in people's laundry and sewing, and she was a widow and she had five children, and she was born in slavery herself. And her mother'd been a washerwoman and her daddy had gotten killed in the Union Army. But the finality of it was, this movement, according to the federal government, by 1905 had at least 300,000 members. That was according to the federal government that tracked them and watched them and was worried about what they were doing. And that was the largest mass movement that black people had ever had, and it was the largest poor people's movement that anybody had had that anybody records up until that time.

The government got very upset that they were doing this and violated their rights to First Amendment petitioning, which she was very aware of, for having learned in school--she kept saying about the Constitution and how she believed in the Constitution and the right of petition--and wanted to put them out of business because, as one official said, `The negroes are running wild and they're getting all riled up over this thing, and when they find out that we're not planning to give them anything, which we're not, they're gonna be very upset and there's gonna be anarchy and riots.' So they were determined to try to put the--prosecute them, stop them from using the mail, accuse them of all kinds of things, and finally in 1917--the movement kept going anyway despite this--and the petitions did go to Congress, which is why I have them and can look at them at the National Archives, and bills were introduced, of course not passed--they prosecuted her, and she was convicted by an all-white male jury--women didn't serve on juries in those days in Nashville, and she was sent to prison.

GORDON: Often when you think back to the times of slavery and all that was denied these folks, when you talk about just the innate ability of human beings to discern what's right and wrong, here's a true personification of that. Here's someone who's born into slavery, as you suggested, who really went after in a way that could marvel some of the pension funds that we know today based on revenue gained by taxes off the cotton trade. I mean, it's a remarkable story of, as you say, one woman who really is uneducated, to a great degree.

Dr. BERRY: Right, and the--she modeled it after the veterans' pensions. At that time, veterans' pensions had been a hot issue since the Union, and they were very organized. The lobby for the men were very successful. But the interesting--one of the interesting things to me is that today when people argue about reparations, one of the arguments, however you stand on the issue--one of the arguments is that the people are dead, you know, they're not still alive and what are we talking about? These people were alive, they had been slaves, they were about 1.3 million still alive in the census of 1900. Frederick Douglass said, who was the most important leader--black leader of that time, said that if the government had simply done this then, then no one would ever raise the question of reparations because it would be settled and this small number of people were dying out anyway.

GORDON: What of the current-day state of reparations, Mary? When you take a look at this and you try to project, if you will, the course of it, as you went back and studied, what did you learn that may or may not be helpful to the argument today?

Dr. BERRY: There have been some cases that are being brought and are still out there, and for the most part they have been unsuccessful. I think the most fruitful course is for John Conyers, Congressman Conyers' bill asking for a committee or a commission to look into the issue. Not to reach any conclusion, but just to look into the issue is probably the bandwagon that people ought to get on who want to do something about this.

GORDON: Dr. Berry, what if on a personal level the idea that through this you are really bringing to light a wonderful heroine who heretofore has not received the accolades that perhaps she should?

Dr. BERRY: Well, before I knew about Callie House--and I can just tell you what Dorothy Height of the National Council of Negro Women said when she found out about this and I told her and sent her the book, she said she felt like somebody had taken away part of her history because she didn't know about this all these years and now this woman's her hero. And she was from Nashville, which just makes it better for me. And she was living in a neighborhood that I was in when I was a baby in the orphanage for a time, a neighborhood I know very well, very working class, a neighborhood in Nashville. And she was a woman heading up a movement which had men and women in it, which was huge, and she was courageous and she was committed and she didn't mind, you know, transgressing all kinds of boundaries as she gave her heart and soul to it. So I became committed that I was gonna finish this, that I was gonna recover this woman and put her out there so that her fellow citizens in Tennessee, where we have heroines and heroes of the state would know about her, and so that everybody would know that she existed and that this movement existed, whatever they think about the cause.

Dr. BERRY: Thank you very much for having me.

CHIDEYA: Mary Frances Berry's new book is called "My Face is Black is True: Callie House and The Struggle for Ex-Slave Reparations."

That's our program for today. To listen to the show, visit npr.org. NEWS & NOTES was created by NPR News and the African-American Public Radio Consortium. 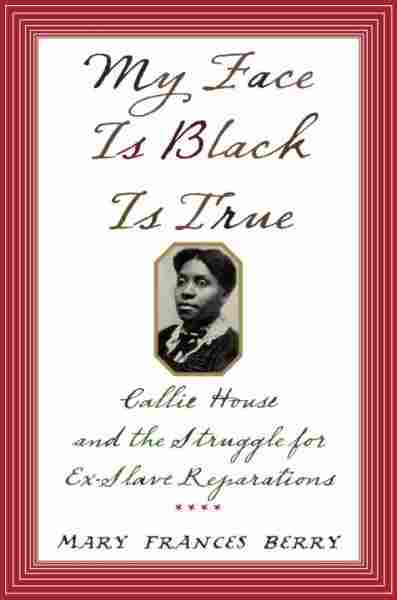 My Face Is Black Is True

Callie House And The Struggle For Ex-Slave Reparations